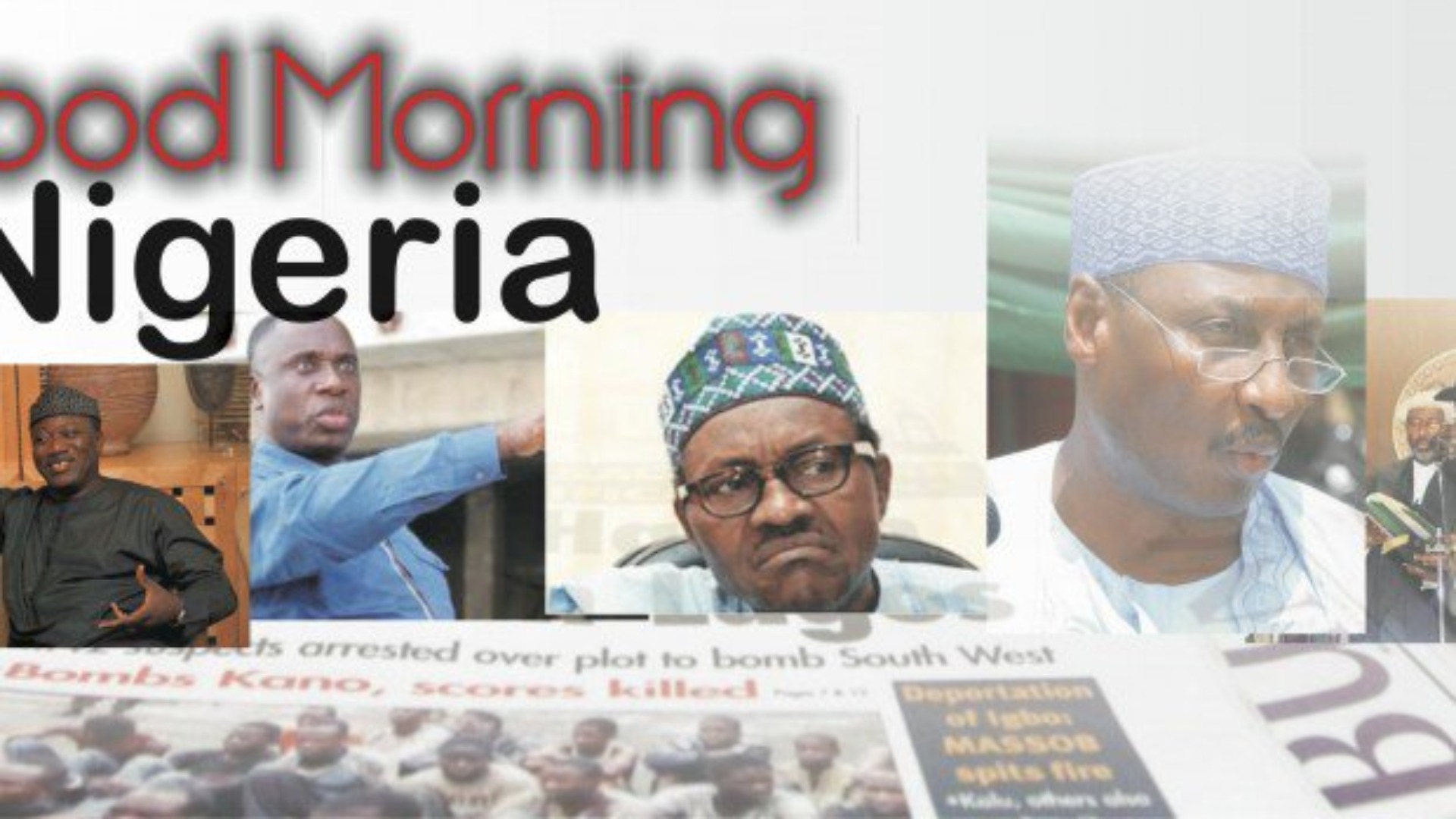 Good morning! Here is today’s summary from Nigeria Newspapers1. The Nigeria Center for Disease Control, NCDC, has confirmed 241 COVID-19 cases in the country.The agency, in a post on its official Twitter page, said Lagos State recorded 142, while Oyo State followed with 15 cases.2. The federal government has said only five airports would be reopened from June 21, while the others remained closed for further assessment.In a circular to airlines signed by Capt. Musa Nuhu, the Director-General of the Nigerian Civil Aviation Authority (NCAA) said domestic airports that will be opened include: Omagwa International Airport Port Harcourt, Nnamdi Azikwe International Airport Abuja, Murtala Muhammed International Airport Lagos, Sam Mbakwe Airport Owerri and Mallam Aminu Kano International Airport Kano.3. Lagos State has recorded 17 COVID-19 related deaths in two-days.The State Commissioner for Health, Akin Abayomi, who made the disclosure, also stated that the State has 4191 active COVID-19 cases, while 875 patients have been discharged.4. The Nigerian Army has announced that a fierce battle between troops and Boko Haram terrorists led to the death of top sect commanders.The unsuccessful attack led to troops’ consequent onslaught that killed the terror leaders loyal to the Abubakar Shekau’s faction of Boko Haram.5. Baba Tela, Bauchi State Deputy Governor, has tested positive for coronavirus.Tela’s result was confirmed in a statement issued by Mukhtar Gidado, Senior Special Assistant to Governor Bala Mohammed of Bauchi State, adding that Tela, who is also the Chairman, State Task Force on COVID-19, contracted the virus while discharging his duties.6. Nigerian government, through the Presidential Task Force, PTF, on COVID-19 has warned congregants against activities such as kissing, hugging, shaking or touching at worship centres.The PTF National Coordinator, Sani Aliyu, said that churches/mosques facilities must be structured in a way that physical distancing can be observed.7. Governor Godwin Obaseki of Edo State has debunked claims in certain quarters that he is planning to dump the All Progressives Congress, APC.Obaseki, who refuted the claim while speaking at a meeting with the ‘Obaseki Mandate Group’ in Abuja on Tuesday, maintained that he will achieve his second tenure on the platform of the APC.8. A Federal Capital Territory, FCT, High Court sitting in Maitama, Abuja on Tuesday discharged former Kogi West Senator, Dino Daniel Melaye of criminal charges leveled against him by the Attorney General of the Federation, AGF.The FCT High Court cleared Melaye of giving false information to police, as claimed by the AGF.9. President Muhammadu Buhari has assured the President of the African Development Bank, Dr Akinwumi Adesina , of Nigeria’s support in his bid to get re-elected as the bank’s president.A statement by the Special Adviser to the President on Media and Publicity, Femi Adesina, on Tuesday, quoted the President as speaking at State House, Abuja, on Tuesday, while hosting Adesina on a courtesy visit, where he also told the AfDB’s president that “Nigeria will stand solidly behind him”.10. The Inspector General of Police, IGP Mohammed Adamu, has ordered the immediate transfer of the ongoing investigations into the death of Miss Vera Uwaila Omosuwa from the Edo State Police Command to the Force Headquarters in Abuja.According to a statement by the Force Public Relations Officer, DCP Frank Mba, on Tuesday evening, the IGP’s directive is sequel to the preliminary report from the team of investigators and forensic experts earlier deployed to assist the Edo State Police Command in the investigations into the unfortunate incident.
Related Topics:adams oshiomholeAPCgodwin obasekiigp AdamuncdcrapeUwa