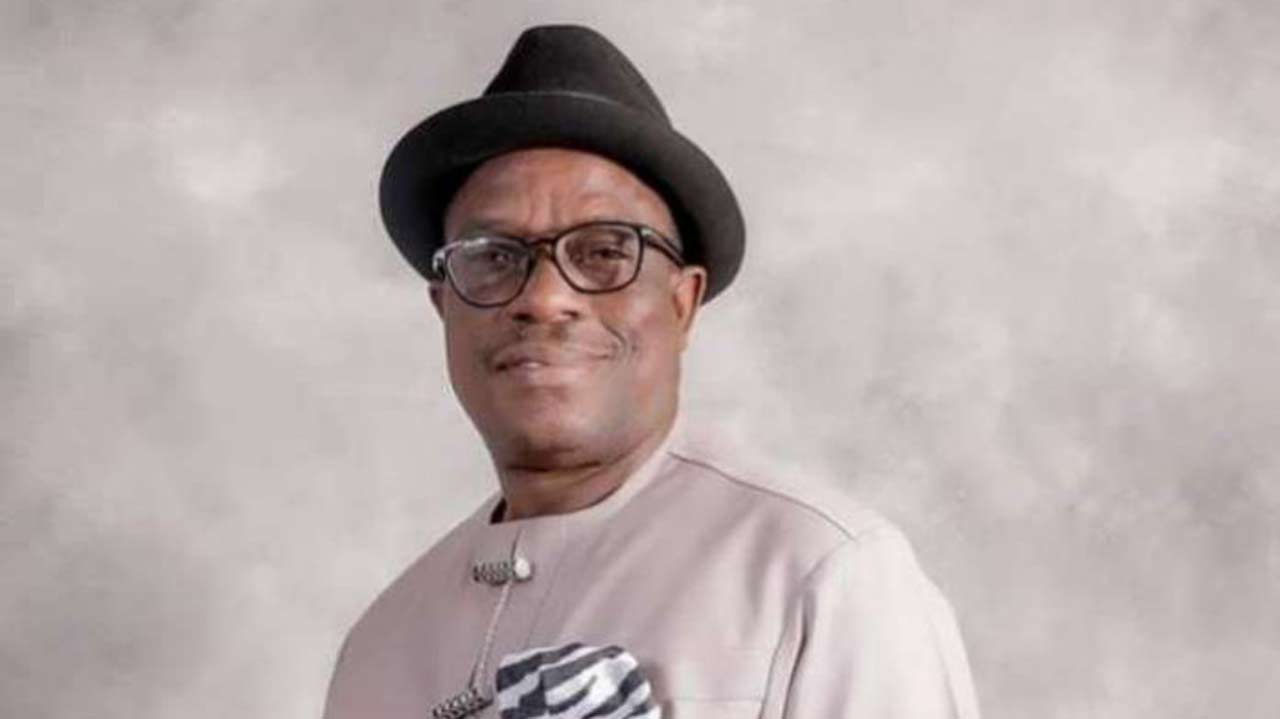 Factional national chairman of the All Progressives Congress (APC), Victor Giadom got the last laugh in his protracted supremacy battle with Adams Oshiomhole, the suspended national chairman.

President Muhammadu Buhari, yesterday, dealt the last blow to Oshiomhole’s hope of victory when he suddenly indicated that he would participate in today’s National Executive Committee (NEC) meeting in Abuja.

Despite controversies surrounding its convocation, today’s NEC meeting comes as a last ditch effort to salvage the ruling APC if it is not scuttled.

The two contending parties in the claims and counter-claims that trailed Oshiomhole’s suspension as national chairman are divided over today’s NEC.

However, in what came as public disclosure of his stance on the APC crisis, President Buhari, the leader of the party, aligned with the Giadom faction.

Making the position known in a discussion with state House correspondents, the Senior Special Assistant (SSA) to the President on Media and Public Affairs, Mallam Garba Shehu, said the President would attend the NEC meeting convened by Giadom for today.

Shehu explained that the president’s stance came after receiving “very convincing advice on the position of the law as far as the situation in the party is concerned and has determined that the law is on the side of Victor Giadom as Acting National Chairman.”

The SSA said since the president would always act in accordance with the law, he (Buhari) would be attending the virtual meeting called by Giadom for today’s afternoon.

“We urge the media to stop promoting manufactured controversies and to not give any further room for mischievous interpretations of the law on this matter. In addition to the President, the Giadom meeting will, hopefully, be attended by our Governors and the leaders of the National Assembly,” Shehu added.

Giadom, in the notice of the NEC meeting, explained that he was acting “on behalf of the National Working Committee (NWC), having been duly authorised by Court Order to act as National Chairman and to preside over all meetings of the NWC and NEC, hereby reconvene the NEC meeting that was earlier billed to hold on March 17, 2020, but was postponed.”

He noted that, “in keeping strictly with the COVID-19 guidelines, the reconvened NEC meeting shall hold by virtual means,” adding that the codes would be communicated through text messages to members of the National Executive Committee.

But, shortly after the notice of meeting was made public, the APC Zonal Vice Chairman (South-South), Hillard Etta, who said he was acting on behalf of the Deputy national chairman, Senator Abiola Ajimobi, said Giadom lacked powers to convene NEC meeting.

Piqued by the war of words between the two camps, some stakeholders, including the Director General (DG) of the Progressive Governors’ Forum (PGF) and members of the legacy parties, warned detractors from scuttling the meeting.

In a resolution, the founding members of the Legacy Parties, stated: “We the representatives of founding members of the Legacy Parties that merged to form our great party, the All Progressives Congress (APC), welcome the Reconvened National Executive Committee meeting billed for Thursday 25th June, 2020; with Open-Arms as a saving grace and APC’s Doctrine of Necessity.”

While appealing to all NEC members to attend or participate virtually as the case maybe, for the collective interest of all and the survival of APC, legacy members, noted, “This crucial meeting is Doctrine of Necessity and the last hope of the recovery of the soul of APC; because we have complained bitterly, wailed and lamented helplessly as our great party is sliding dangerously.”

They regretted that the Peoples Democratic Party (PDP), which was on its knees in 2019, has become the ultimate beneficiary of the rumpus in APC.

“For the avoidance of doubt, may we, for emphasis, state that our rating of the reconvened National Executive Committee meeting as Doctrine of Necessity is that going by Article, 13.1 of APC’s Constitution, the NEC is the principal executive body of our party.

“This being the case, since politics is jaw-jaw, and negotiation is imperative for the resolution of any conflict, the meeting therefore presents a golden opportunity for us to resolve most of the intractable issues bedeviling our great party.

“We restate that this is a win-win meeting, lets take the message and leave the messenger. This is more so when Mr. President has graciously not only accented to the meeting, but provided seamless venue,” the stakeholders stated.

Also, the Director General of PGF, Dr. Salihu Lukman, warned against any act that could undermine the NEC meeting convened by the factional acting national chairman, Giadom.

Amid fears that some key leaders of the party, including Asiwaju Bola Tinubu, and his supporters might not participate in the meeting, Lukman disclosed that the virtual NEC parley “has the support of President Muhammadu Buhari” and billed to hold today at the presidential villa, Abuja.

In a statement entitled “APC at Crossroads – Leaders or Blacklegs?” they argued that it would be in the best interest of the chieftains of the party to attend the parley, stressing that it would afford chieftains opportunity to take drastic steps required to restore order and sanity in APC.

The DG stated: “With all the confusion as to who is our presiding officer, coupled with the fact that the most important structure that is saddled with the responsibility of convening meetings of all organs of the party is fractured and entangled in webs of legal cases, it is either the confusion is allowed to continue and eventually end with the demise of the party, or our leaders find a way to save the party.

“Given such a situation, one would expect our leaders to be united in saving the situation. Will this be the case? Or are we going to have blacklegs acting as so-called leaders working to ensure the demise of the party through creating all manner of divisions just to ensure that the current ugly situation is retained? Would these blacklegs seek to create or entrench all manner of legal confusion?

“These are critical questions now that with the approval of President Buhari, a meeting of National Executive Committee (NEC) has been called. Would these so-called leaders acting as blacklegs seek to undermine the moral authority of the President as the leader of the party?

The DG pleaded with all committed party members and leaders to rally behind President Buhari in support of the scheduled NEC “so that we are able to reset the APC back to its 2013 orientation of inclusive and participatory politics.”

“To achieve that, the public debate should be about proposals to ensure that the NEC succeeds, rather than attempting to throw up legal blockades.”

Meanwhile, rival acting national chairman, Etta, claimed that his life is being threatened, even as he declined to disclose the identity of the suspects threatening his life.

Etta’s claim comes ahead of the APC NEC meeting convened by his rival Mr. Victor Giadom.

In a phone chat with reporters, Etta, who said he was holding brief for Ajimobi, claimed that he was privy to information that hired thugs would be sent to set the APC National Secretariat on fire as part of the grand design to eliminate him.

His words: “We got information that they are going to send thugs from Port Harcourt, they are coming here to burn the Secretariat and make it look like the National Working Committee instigated a fire incident, so that the Secretariat will be burnt down and then, they will give the impression that it is the NWC that is burning down the Secretariat because they don’t want Victor Giadom to come in.

“They have two intentions, that is number one. Number two is that they are going to make an attempt on my life. I just thought that I should let the Press know this. I am just moving out of my house, I’m coming to the Secretariat; from there, I will report to the police.”

But when confronted with the allegations, Giadom expressed his confidence in the ability of the Police to track and address the issues raised by his rival, adding, “Ordinarily, I would not have reacted. If he has such information, let him report to the Police. The police have the capability to track such persons.

“Maybe that is his plan, because we all know that there is a ban on inter-state movement and it is difficult. He should report to the police if he has any such information except, of course, he is the one planning to bring in people from Calabar.”

Efforts to reach some members, including the National Vice Chairman (Southwest), Pastor Bankole Oluwajana and the National Legal Adviser, Mr. Babatunde Ogala, failed, as they could not take their calls.

But an APC chieftain, Mr. Fouad Oki, said the party would go ahead with the NEC today, and with President Buhari in attendance, stressing, “no going back again; all parties will fall in line.”

Oki said the most likely thing to happen today is for NEC to ask Giadom to continue in acting capacity, pending when another NEC holds. “I also doubt if the other factions would have the courage to challenge the decision in court, since President Buhari has taken a position.”