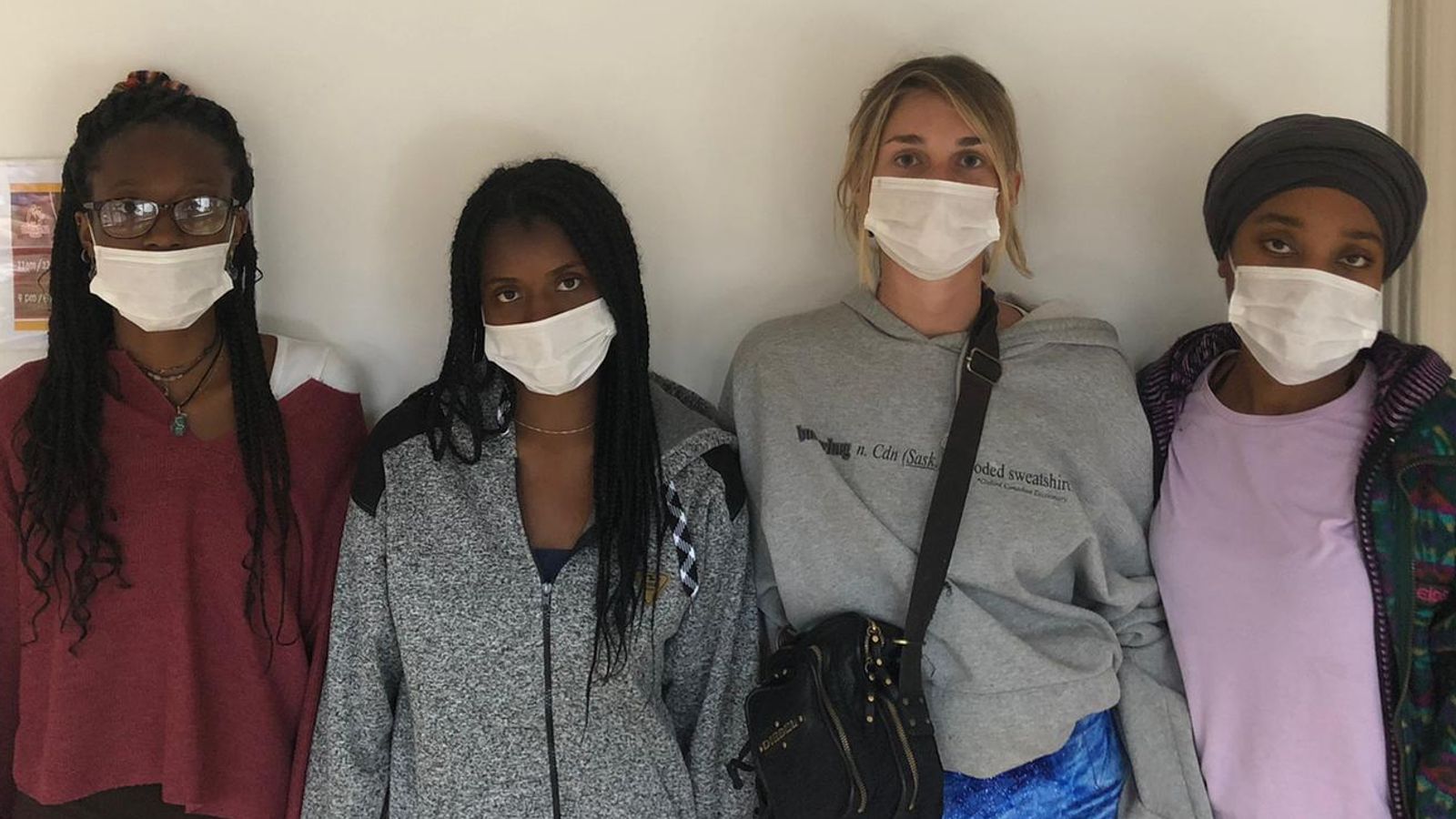 Four young British women fear being forced to stay locked down in a hostel in Peru for up to three months after two fellow residents tested positive for the coronavirus.
The group from London and Kent say they are not allowed to leave their dormitory except for meals and to go to the bathroom under strict quarantine rules.
They were imposed by the Peruvian authorities on Wednesday just as the first UK rescue flight was due to travel to Peru to transport some 200 other stranded British travellers home.

“Pretty much everyone in this hostel will get coronavirus,” Sabina Gordon, 22, told Sky News. “We are just in a COVID-19 petri dish.”
Her friends, Nadeen Griffiths, 22, Hilary-Nye Aremu, 22 and Michaela James, 21, agree.

“We are speaking out because we feel as though our rights are being infringed,” said Ms Griffiths. “Things are becoming more and more severe.”
The women at the hostel in the southeastern city of Cusco are among hundreds of thousands of British nationals trying to return home from overseas as the coronavirus pandemic triggers an unprecedented closure of borders and a mass cancellation of flights.

MPs have piled pressure on Boris Johnson and Foreign Secretary Dominic Raab to do more to help stranded British nationals return home.
The prime minister said there was a “massive, massive” repatriation effort under way.
Staff at the Foreign Office and in missions around the world are working “around the clock” trying to offer advice to those in need, according to a diplomatic source.
A second source said that people are working “phenomenal hours”, describing the situation as an “unprecedented challenge”.

The problem is that host governments are shutting exits without notice and airlines are suspending routes, meaning that British diplomats are having to try to negotiate special access for their citizens as well as, in some cases, charter flights to bring them home.
They are also acting as scores of other governments simultaneously scramble to rescue their nationals as well.
Britain is speaking to allies to try to arrange for seats on flights that they might be facilitating.

The Foreign Office does not keep track of the movements of everyone travelling overseas so officials must rely on broad estimates and the volume of phone calls to their helplines and missions.
In one piece of good news, a charter flight was due to pick up around 200 British travellers from the Peruvian capital of Lima on Wednesday and bring them home. There are thought to be up to another 500 Britons still stranded in the country with other rescue flights pending.

Ms Gordon and her three friends have been stuck in Peru since the government announced it was shutting its borders for 15 days from 16 March in an attempt to stem the spread of COVID-19, the illness caused by coronavirus.
The women said they have tried to contact the Foreign Office, their MPs, the foreign secretary and even the prime minister but have only received automated responses.
At first, the hostel where they are staying allowed them to leave once a day to purchase food and other supplies.

But on 22 March, restrictions became tighter after it emerged that someone who had been staying at the residence had tested positive as he tried to return home to Mexico.
Soon after, two other travellers – one from the Netherlands and another from Finland – staying at the hostel started to show symptoms of the disease.
They were put into private rooms and tested for coronavirus. The positive result came back on Wednesday, prompting the even tougher lockdown, with all residents confined to their dormitories except for mealtimes.
More than 140 people, including staff and about nine British nationals, are at the hostel.

Ms Gordon and two of her friends are together in one 12-bed room, while Ms James is in a separate dormitory.
The four, who are required to wear face masks, said they did not know how they would pass the time. “There are 12 of us in a bedroom – everyone is going to go crazy,” Ms Gordon said.
The women also do not know how long they may have to stay confined to the hostel, noting that it could be between a month to three months.
“They have not told us when we will find out how long it will be,” Ms Gordon said.