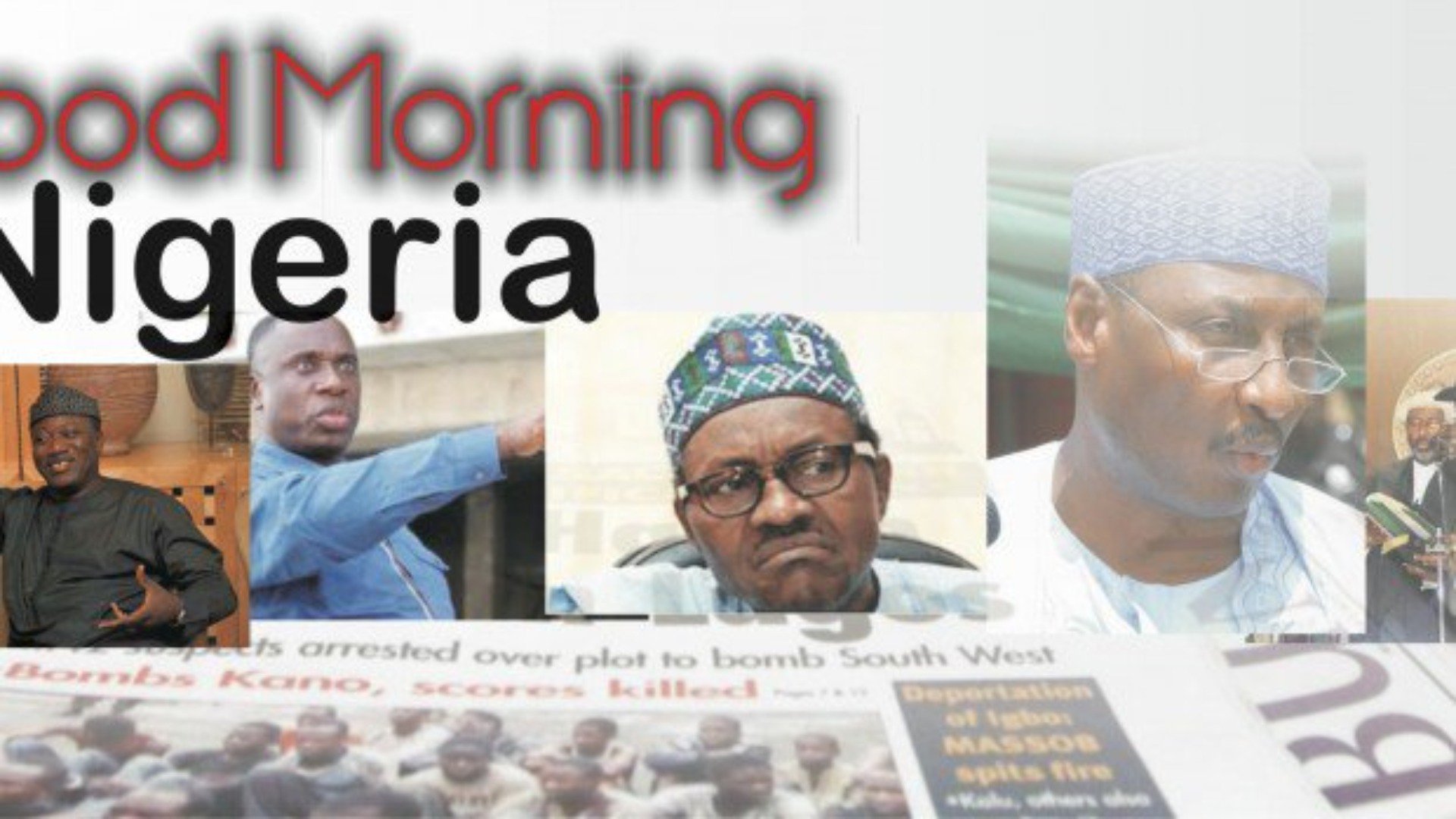 1. Sen. Abdulfatai Buhari (APC-Oyo North) on Sunday recommended capital punishment for kidnapping and other forms of violent crimes in order to tackle the growing insecurity in the country.

Buhari told newsmen in Ibadan that the spate of kidnapping and killings across the country would continue unabated if such a drastic measure was not taken.

2. Following the plan of Miyetti Allah Cattle Breeders Association of Nigeria, MACBAN, to establish vigilante group in the Southeast region, the Ohanaeze Ndigbo Youth Council worldwide on Sunday demanded an immediate sack of Fulani youths serving as gatemen for Igbo in the zone.

The apex Igbo socio-cultural group made this known in a statement signed by its President-General, Mazi Okechukwu Isiguzoro, and made available to DAILY POST, in Abakaliki, the Ebonyi state capital.

3. The Senate President, Ahmed Lawan, has accepted Olu Onemola’s rejection of his appointment as Special Assistant on New Media.

A statement by the Special Assistant to the Senate President on Media & Publicity, Mohammed Isa, made this known on Sunday in Abuja.

4. Former chairman of the Ondo State chapter of the All Progressives Congress, APC, Isaac Kekemeke has attributed the rumblings with the party in state to the failure of the state governor, Oluwarotimi Akeredolu, to accommodate all interests within the party.

Kekemeke, who is the pioneer chairman of the party, during a live radio programme, explained that since the emergence of Akeredolu as governor, he has been unable to bring together and unite the various factions within the party.

5. Professor Is-haq Oloyede, the Registrar of the Joint Admissions and Matriculation Board (JAMB), has called on the Federal Government to place an embargo on the establishment of new universities.

The Registrar, in the board’s Weekly Bulletin released by JAMB’s Head of Information, Dr. Fabian Benjamin, said efforts should rather be geared towards developing existing universities in the country.

6. The Christian Association of Nigeria, CAN, Kaduna State chapter, has enjoined its National President, Dr. Supo Ayokunle, to see his recent re-election as an opportunity to defend the religious liberty of millions of the faithful and the rule of law.

This was as it congratulated its National President over his victory at the recently conducted election of the association, urging Ayokunle to see his re-election as a wake-up call to defend the religious rights of Christians in the country.

7. The scarcity of petroleum products has worsened on its fifth day in Calabar, the Cross River State capital, even as economic, social and political activities are grounded ar the weekend.

Passengers and other commuters in the metropolis were stranded as workers, traders and other businessmen and women, as well as Christians, could not board vehicles to their various destinations.

8. A former Chief Whip of the National Assembly, Senator Rowland Owie, has said that the North would rule for three years after the tenure of President Muhammadu Buhari.

Owie, in a statement yesterday, predicted that after the North has had another grip on power in 2023, the South East geopolitical zone would produce the next President.

9. About three persons have been reported dead in a bloody clash between Ikot Osute and Ikot Ukpong villages of Oruk Anam council areas of Akwa Ibom State

It was gathered that trouble started when one Ime Etuo (female) had a misunderstanding with her husband and she went back to her father’s house in Ikot Osute. But later, the husband reconciled with her and moved into his father in-law’s compound in Ikot Osute village to live with Ime.

10. Operatives of the Benin Zonal Office of the Economic and Financial Crimes Commission, EFCC, at the weekend, arrested 16 suspected internet fraudsters aka ‘Yahoo boys’ at their hideout in Ughoton and Udu communities, Warri, Delta State.

The suspects, who are between the ages of 20 to 30, were arrested sequel to intelligence report, a statement by EFCC spokesman, Tony Orilade said.