AREWA
AREWA
AREWA
Search
AREWA
Search
Home News Arewa 20 Passengers Die In Kano As Boat Conveying School Pupils Capsizes
WhatsApp
Facebook
Twitter
No fewer than 20 bodies have been recovered, while many others are still missing following a boat mishap in the Bagwai Local Government Area of Kano State.
It was learnt that seven people were rescued alive during the incident that happened on Tuesday. 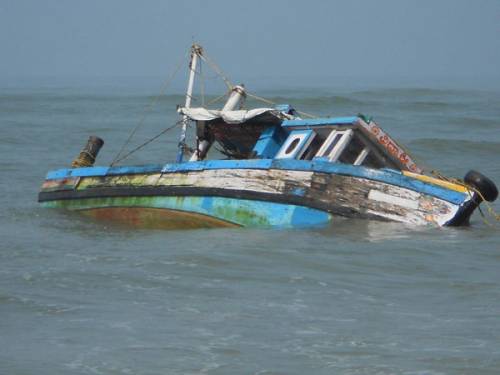 According to Daily Trust, the boat, with 47 passengers on board, capsized while ferrying some adults and pupils of Madinatu Islamiyya School from Badau village heading to Bagwai.
The pupils were said to be going to participate in the Maulud celebration marking the birth of Prophet Mohammed SAW.
Confirming the incident, the spokesman for the Kano State Fire Service, Malam Saminu Abdullahi, who noted that the accident happened at about 9:15pm, affirmed that 20 bodies had been recovered while the rescue operation was ongoing.
“Only seven persons were rescued while the remains of those that died had been deposited in a hospital,” he added.
Poor visibility was said to be affecting the rescue operation.