by Khad Muhammed
April 15, 2019
WhatsApp
Facebook
Twitter
Contrary to report credited to the Police authority that late Ochigbo Ogah Jumbo slumped and died, an autopsy report has revealed that he passed out as a result of brutality by officers of the Nigeria Police, DAILY POST has learnt.

Mr. Jumbo, an Assistant Superintendent of the Nigerian Security and Civil Defence Corps (NSCDC) was reportedly brutalized to death in presence of his wife and kids on Wednesday, March 20, 2019, in Nyanya, Abuja by men of the Nigeria Police Force, said to be on duty controlling traffic.

“He was said to have disobeyed traffic regulations and accosted by two traffic wardens who are not conventional policemen. On contravention, he was arrested and he drove himself to the police station with immediate members of his family who were with him at the time of arrest and a Traffic Warden in his own car. Traffic Wardens are not conventional Police Personnel that is why they wear yellow top for easy identification. They don’t bear arms either,” Mba had said in a statement.

The Police Spokesman also denied that the late Jumbo was bartered by his men, claiming that “there was no sign of physical assault on the deceased”.

Association of Idoma Lawyers, through its Patron, Chief Godwin Obla, also petitioned the IGP, requesting for urgent investigation into the death and possible prosecution of the perpetrators of the act.

The Police Boss, therefore, requested that the NSCDC and the family of the deceased should nominate medical doctors of their choice to witness an autopsy that would be conducted, to unravel the real cause of the death of Mr. Jumbo.

IGP Adamu said, “an autopsy, which is a comprehensive forensic examination on the body of a dead person, will help the investigators to have a definitive understanding of the real cause of death of the deceased.”

In the autopsy conducted at the Maitama General Hospital on March 26, 2019 by 3 renowned Pathologists, one of whom represented the Nigeria Police Force, the report said, late Jumbo died as a result of “multiple skin and soft tissue injuries, blunt force injury to the head and cerebral oedema” suffered during the police brutality.

A copy of the autopsy report and the coroner’s ordinances obtained by DAILY POST also confirmed that, “there was no natural disease in the body to sufficiently explain this sudden death”, as being peddled by the Police authority.

“Death was due to the blunt force injury to the head. He was said to have been involved in an altercation with Traffic Wardens at the Traffic control point on “Redeemed Junction” along Nyanya – Karshi road, at about 7.25am on 20 March, 2019, which led to his receiving repeated blows to the head and body with fists and batons, both there and later on in the police station. He collapsed and was taken first to Nyanya General Hospital, and then to Asokoro District Hospital, Abuja where he was certified dead by 10.30am that same day.

“The brain was swollen as evidenced by widening of the folds of brain tissue (gyri), and narrowing of the spaces in between these folds (sulci). In medical parlance, this is referred to as cerebral oedema. Blunt force injury to the head is a well-recognised cause of cerebral oedema, a condition in which there is severe impairment of brain function. This was the cause of his death”, the report reads in part.

The autopsy exercise which lasted for a week, was also observed by Detective John Anebe (IPO, State CIID), who was mandated to handle investigations into the death.

According to the report, multiple skin and soft tissue injuries were observed, which when analysed, shows as follows:

“Forehead and Face: Bruise on the right forehead, 1cm above the lateral aspect of right eyebrow, measuring 2.5 x 1cm.

“Bruise on the lateral aspect of the skin of the left eye socket, 1.5cm below the left eye,

“Left Upper Limb: Diagonal scratch injury, on the flexor aspect of the left arm, starting medially, 3cm above the popliteal fossa, and extending upwards and laterally for 5.5cm.

“Two bruises, next to each other (above and below), just beneath the left knee cap, measuring

All efforts to get the reactions of the Force Spokesman, Mba, proved abortive, as he only responded to a text message, directing our reporter to speak to the Commissioner of Police, FCT Command, CP Bala Ciroma or his PRO.

When contacted through a phone call, the Police Public Relations Officer for FCT Command, DSP Manzah Anjuguri, said he could not respond to any official matter as he was undergoing a course.

Mrs. Ada Jumbo, wife of the deceased, in an extract obtained from her statement, said her husband was dragged on the floor for several metres after he was mercilessly hit on the head with baton.

“I and my children continued to plead with them not to kill my late husband as they were dragging him on the floor to the Police Station. On arrival at the Police State, the Police men who apparently were dismantling from duty that morning numbering over 10 (I can identify most of them) swooped on my late husband and continued to beat him and calling him names and making uncomplimentary remarks about Civil Defence Corps.

“My children and I prostrated before them begging for mercy. They dragged my late husband behind the counter and forcefully sat him on a white plastic chair and continued manhandling him without restraint, leading to my late husband slumping.

“They claimed he was only pretending when I raised an alarm that my husband was not moving and should be rushed to the hospital, I tried to get to the back of the counter but was prevented by a Police man (who I can identify). My late husband’s lifeless body laid on the floor while they continued to mock him in spite of my cry and entreaties that they should please take him to the hospital.

“About thirty minutes after my late husband slumped, the Divisional Police Officer (D.P.O.) (who I can identify) arrived the Police Station obviously informed of what had happened and began to shout at my late husband’s lifeless body that he should stop pretending and then ordered one of his men to bring him a syringe so he can prick him and see whether he will still continue pretending. In the ensuing confusion, the DPO after about 20 minutes of his ranting, ordered his men to get one of the Police vehicle’s and take him to the hospital”, Mrs. Jumbo said.

A family source also told our reporter that the Police authority had never visited nor shown sympathy to the family since a month ago, when their breadwinner was gruesomely murdered. 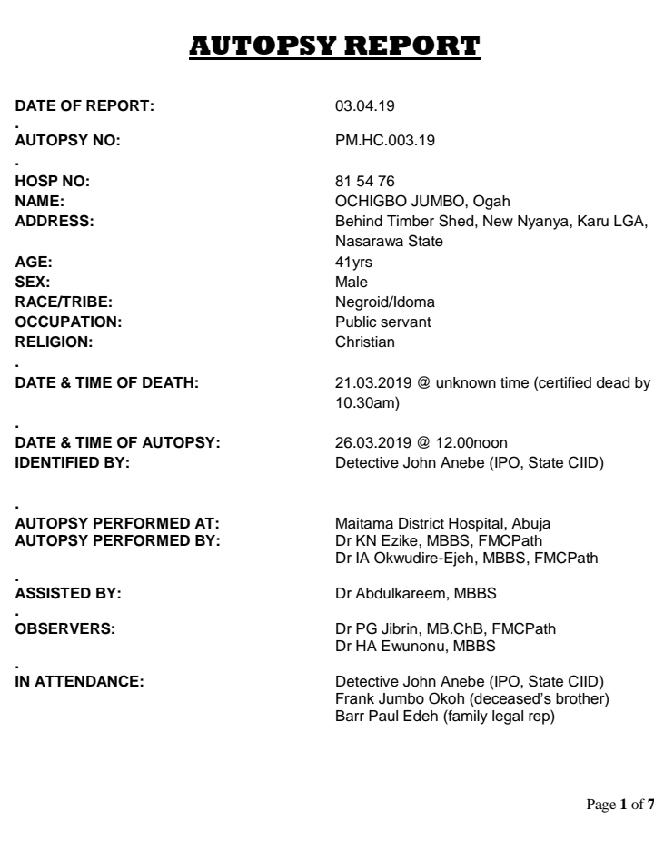 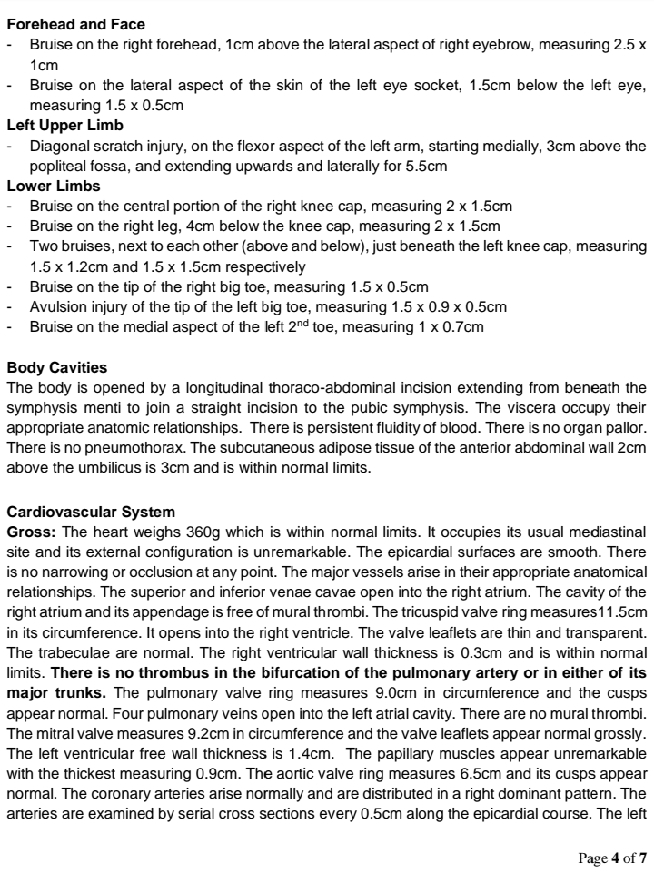 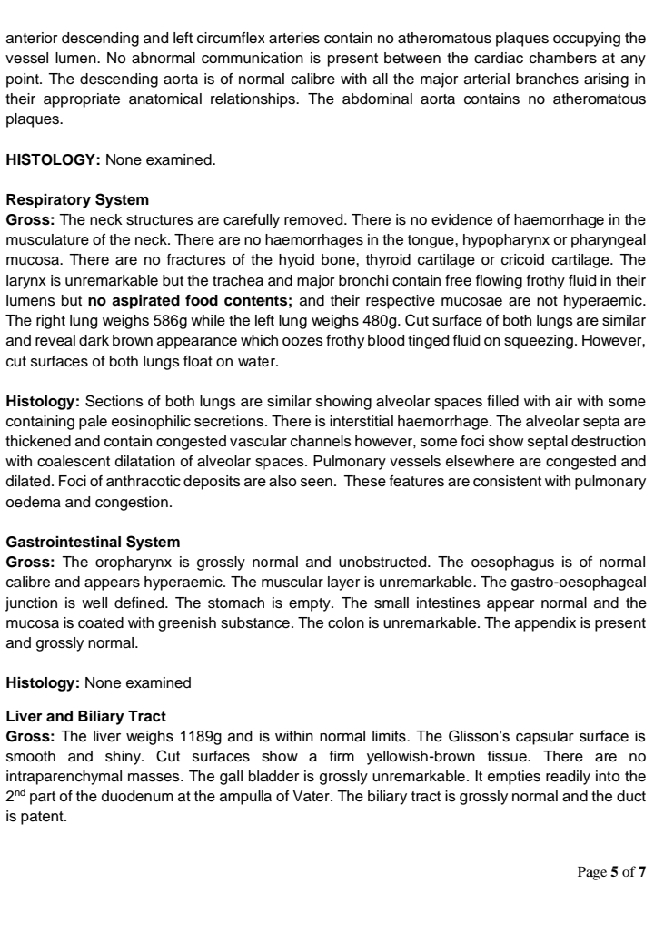 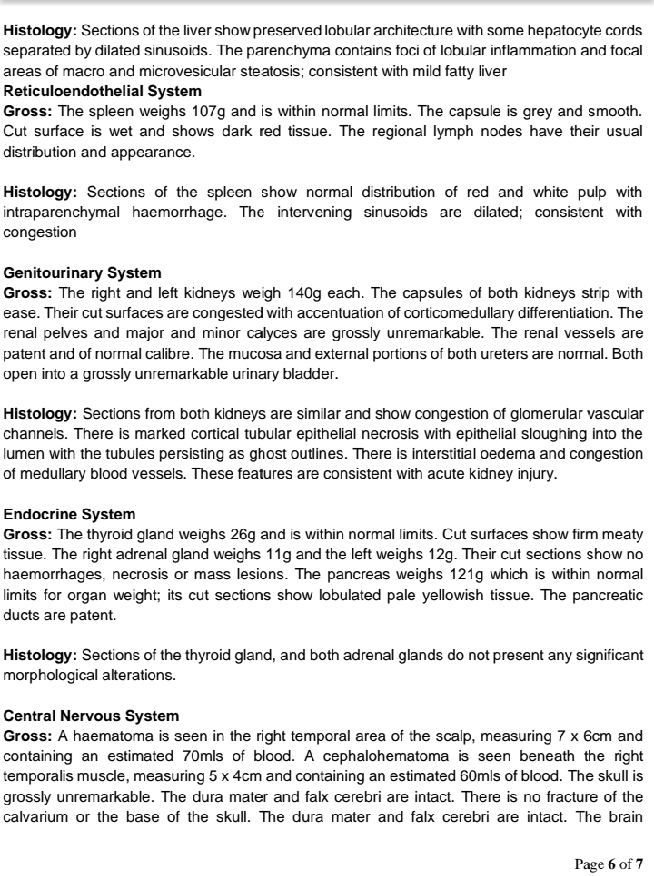 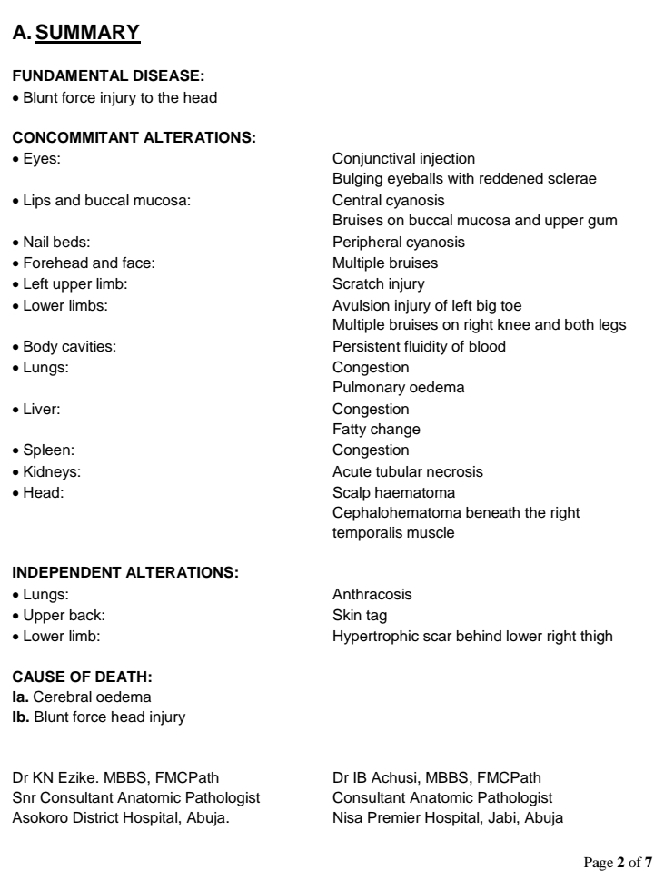 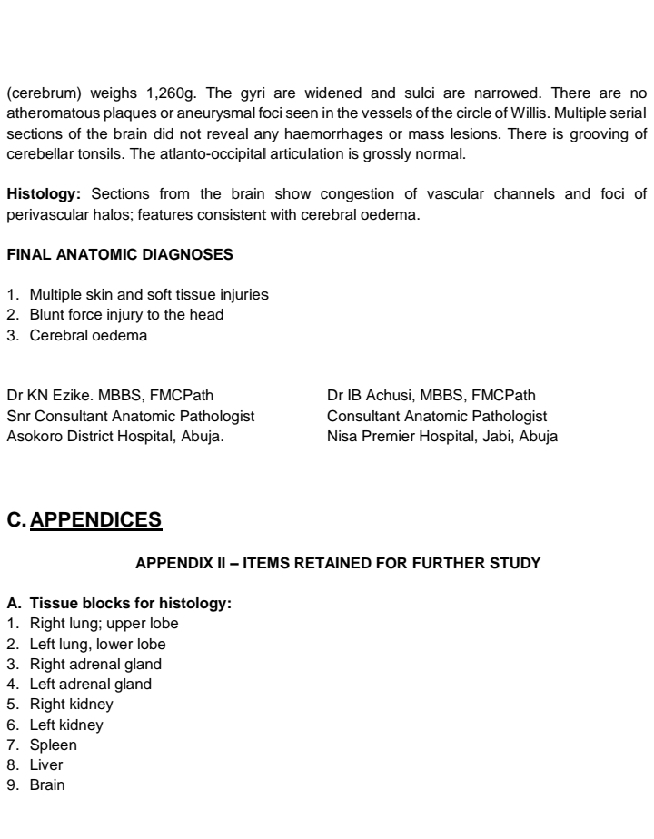