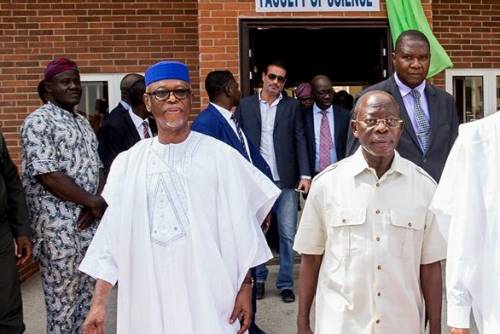 Chief John Odigie Oyegun, former National Chairman of the All Progressives Congress (APC), has expressed disappointment over the regime of Adams Oshiomhole as the incumbent chair of the party.

Oyegun, in a statement by Chief Ray Morphy, Public Affairs Adviser, said one of Oshiomhole’s mistakes was the comment on “booby trap”.

He also stated that Oshiomhole lacked the ability to manage different things that make up a state, accusing him of acting contrary to the decision taken by the APC’s National Working Committee.

“That statement of ‘booby traps’ is ludicrous and infantile, an attempt to drum up justification for the failings of the party under Oshiomhole’s chairmanship. Oshiomhole failed because he lacks the temperament that is required to run a political party,” said Oyegun.

He continued, “He lacks the capacity to manage the different interests and tendencies that constitute a political party. He engages his mouth before engaging his mind, so he offends party members. So, how does that constitute booby traps by Oyegun, the erstwhile chairman?”

Oyegun is also blaming Oshiomhole for the electoral loss in the last general elections which made the Peoples Democratic Party to gain some ground.

“How would you not have crisis in states with the confusion that Oshiomhole created when he gave the states freedom to choose their methods of picking candidates for elections. Much of the crisis in the states arose out of sheer incapacity on the part of the current chairman. How has this Oshiomhole incapacity become booby traps by Oyegun.

“Only a bad carpenter quarrels with his tools. Indeed Oshiomhole is degrading and demarketing the party, rather than seek to bring more people on board, he is rather chasing people out of the party with his agbero style of engagement,” the statement said.