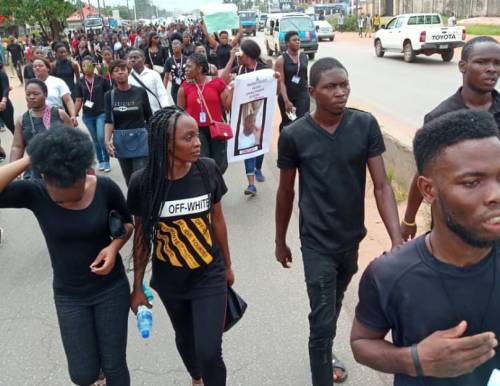 Muhammed Mustafa, Delta State Commissioner of Police, has confirmed the arrest and detention of a policeman attached to the ‘B’ Division of the state command, who shot a student of the Federal College of Education (Technical), Asaba.

The student was shot during the Delta North senatorial district primary of the All Progressives Congress (APC).

The primary was postponed from Tuesday to Wednesday, following the alleged invasion of the venue by armed thugs said to be working for the wife of the former National Chairman of the Peoples Democratic Party (PDP), Mrs. Miriam Nneamaka Ali.

The deceased, who was identified as Henry Okeke, was said to be a 200-level student of Industrial Technical Education of the institution. 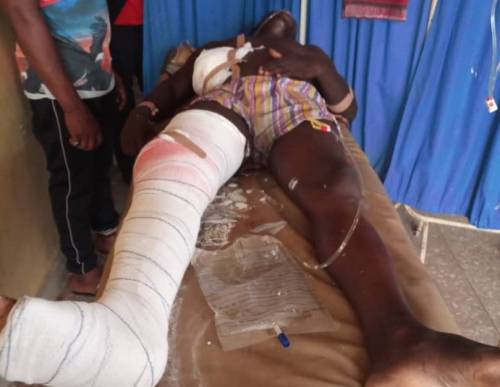 Narrating the details of the incident to SaharaReporters on phone, Speaker of the Student Union Government (SUG), Onochie Vincent Ubani, said the students’ union leaders decided to cash in on the opportunity of the primary election to boost internally generated revenue by collecting N100 from hawkers, who stormed the place to make brisk business.

“As the collection was going on, we heard sporadic gunshots, and it was during the shooting we realised that one of our students, Henry Okeke, has been killed by the policeman for no just cause. During the sporadic shooting, another person was also shot and was rushed to the Federal Medical Centre (FMC), Asaba,” he said.

Following the tragic incident, the APC primary was disrupted as angry students invaded the venue and chased out party officials and delegates.

Students and members of civil society groups took to the streets of Asaba to protest to the killing, with a call on the police to investigate bring the officer found guilty to justice. 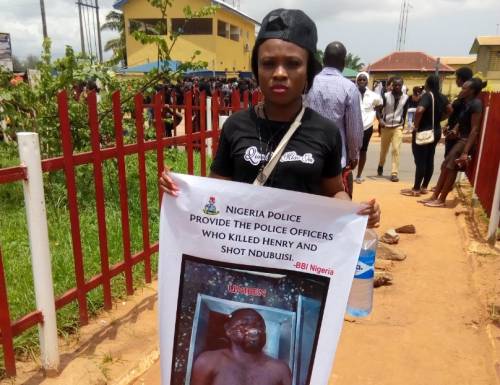 Our correspondent learnt that the injured student, identified as Ndubuisi, is a staff of the state government working with the Delta State Traffic Management Authority, while Okeke’s body has been deposited at the FMC mortuary, Asaba.

Prince Harrison Gwamnishu, activist and founder of Behind Bar Rights Initiative (BBI), a non-governmental organisation working to strengthen human rights movement and culture within Nigeria, condemned the killing and called for the immediate prosecution of the police officer.

Gwamnishu, who also condemned the arrest of one of his members at the premises of FMC, Asaba, raised the alarm that he has been declared wanted by the police for his role in the protest.

His words: “The deceased Okeke has been deposited at the FMC mortuary in Asaba. The civil servant Ndubuisi was shot in the knee and stomach, and after surgery, several bullets were extracted from his body at the FMC here in Asaba.

“We members of the BBI condemn, in its entirety, the police shooting which led to the killing of the student and a civil servant severely wounded. Behind Bars Rights Initiative paid for Ndubuisi’s six pints of blood immediately he was brought to the hospital. The police who brought him dumped him at the hospital.”

Confirming the incident, the Delta State Commissioner of Police, Muhammed Mustafa, who described the incident as unfortunate, disclosed that the policeman who carried out the shooting has been arrested and detained at the Police headquarters, Asaba. He also appealed to the students and residents to remain calm as the Police is already handling the matter.

It was learnt that the during his visit to the victim at the Federal Medical Centre, Asaba, Mustafa deposited the sum of N200,000 for the treatment of the victim.

Experts have lamented the level of devastation and negative impact insecurity has brought upon the country. In a latest study carried out by Nextier, a...
Read more
#SecureNorth

Police in Jigawa State have arrested a 65-year-old man identified as Ibrahim Suleiman of Tsigi Quarters in Kiyawa local Government in connection with the...
Read more
Education

The Deputy Rector of Osun State Polytechnic, Iree, Dr Tajudeen Odetayo has been appointed as the Acting Rector of the institution. This is coming after...
Read more
#SecureNorth

Thirteen (13) suspects have been apprehended by the Police in Adamawa State during a raid of criminal hideouts. The police recovered one AK-47 rifle, two...
Read more