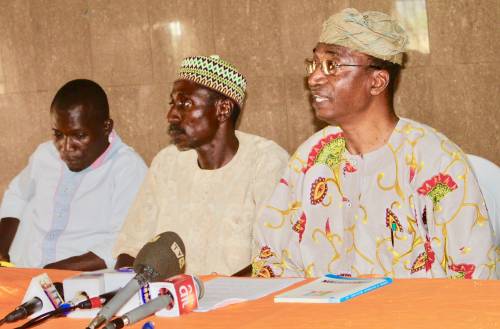 Tunji Abayomi, the All Progressives Congress (APC) aspirant in the Ondo North Senatorial District of Ondo State, has threatened to dump the ruling party.

Speaking with journalists in Akure on Monday, Abayomi noted that he was cheated by the party in an “act of illegality” by the party’s National Chairman, Adams Oshiomhole.

The Okeaagbe-born human rights activist said he was battle-ready to drag the party’s National Working Committee (NWC) led by Oshiomhole to court for allegedly substituting his name for another.

He argued that he won the October direct primary election conducted by the party, but was surprised that it was incumbent Senator Robert Ajayi Boroffice whose name was sent to the Independent National Electoral Commission (INEC).

Already, sources close to Abayomi have told SaharaReporters that Abayomi had already concluded plans to defect to the Action Alliance (AA). One of the sources, who pleaded not to be named, said the defection plans were still being kept secret. He added that Rotimi Akeredolu was being carried along in the desperate bid to leave the APC for the Action Alliance (AA), as Akeredolu was himself aggrieved and “willing to spite Oshiomhole and President Muhammadu Buhari”.

“On October 6, 2018, I participated in my ward in the APC primary with other senatorial aspirants and came first and was declared winner by the party,” he said.

“It is therefore strange that my brother Senator Ajayi Boroffice, who did not win in the APC primary, will wrongly, improperly, unlawfully, unjustly and unconstitutionally be declared a candidate for the Ondo North Senatorial zone by Comrade Adams Oshiomhole. I found it also disappointing that Senator Borofice would accept an unjust and unfair victory.”

“With regard to the present issue, the constitution of APC forbids ‘automatic ticket,'” he said.

“In section 20 of the APC constitution ‘Nomination of candidates for Senate shall be through direct or indirect primary election to be conducted at the appropriate level’. No option is given to APC Chairman of NWC to force any direct primary on any state. It is not like a pool that can be fixed.

Abayomi declared that he is the winner of the primary election and asked the Oshiomhole-led NWC to do the needful by adhering strictly to the party’s constitution.

“In my view, power to propose granted to the NWC of APC defeats, power to declare, assume or enforce,” he said.

“So, it is today that my party APC is headed by a Chairman that cannot even obey APC constitution. Do you then wonder why we have crises everywhere?”

Noting that he is in a “serious pain”, Abayomi said that he had protested to Governor Rotimi Akeredolu over the unfavorable action of the party’s National Chairman, Mr Oshiomhole.

He said he was the real “authentic” candidate of the APC in the North senatorial district of the state and having participated in the primary election and won with wide margin.

The constitutional lawyer later hinted that despite the “injustice” he would still join in the 2019 race and contest in the election from another platform.

“I am the authentic candidate and they have failed to pick me, in violation of my right.

“Therefore, I will run for APC, but I might run on a different political platform in order to protect the right of the people.

“With the regards to the closure of candidature, we have up to November 17 for substitution.

“If I now decide to run on a different political platform for APC in the north senatorial zone, that I will let you know.

“I will come back to you, you are my friends, you should all know my decision. I will still see you again on this issue, certainly, before November 17.”

“In Ondo north senatorial zone, I am the only candidate. And since Adams Oshiomhole has pushed in a sole candidate, contrary to the will, approbation and wish of our people, it means that there is no candidate as at now before INEC” he added.

However, Mr. Abayomi added that he had begun consultating with members of his senatorial district on his next line of action to defect, since the Oshiomhole-led NWC had decided to block his way.

“Oshiomhole and his NWC members have blocked my right to political participation as a winning candidate,” he said.

“In the meantime, I have begun consultation with the party members in Ondo North Senatorial Zone to explore all remedies that are available and allowable, taking into consideration the interest of our people.”