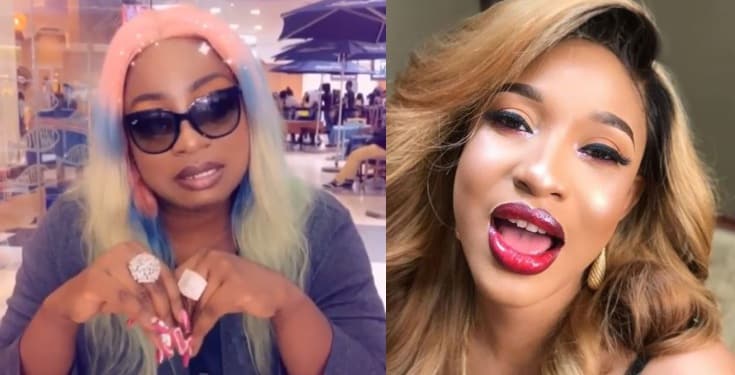 Actress Anita Joseph has reacted in defense of her colleague and friend, Tonto Dikeh over her face-off with ex-husband, Olakunle Churchill

Tonto since her tell-all interview with Daddy Freeze about her failed marriage with ex-husband and father of her son, Churchill has come under serious attack.

However, the actress has not been mute as she has lashed out and responded to most comments targeted at her.

Recall that Tonto had revealed how she caught her ex-husband, Olakunle Churchhill on a red pant, with red candles and laptop at night, describing him as a Yahoo boy and scammer.

She has continued to lash out at critics and those who made jokes about her situation.

But, Anita on Saturday defending Tonto Dike in a one-minute video posted on her Instagram page, asked Nigerians to allow the mother of one vent if that is the only way she can find healing.

According to her, most of those writing about a Tonto do not have good marriages to be proud of.

Anita said: ‘Some Nigerians, sha. I see a lot of you writing stupid things. I know a lot of you, your marriage aren’t good but you can’t talk because if you talk, what will people say? And you are dying in silence.

“If Tonto wants to talk from now till next two years, let her talk. I support her. If it is the only way she will clear off her chest, let her talk.

“You cannot tell her how to heal. You were not there and if you have never been in her situation, don’t talk”.