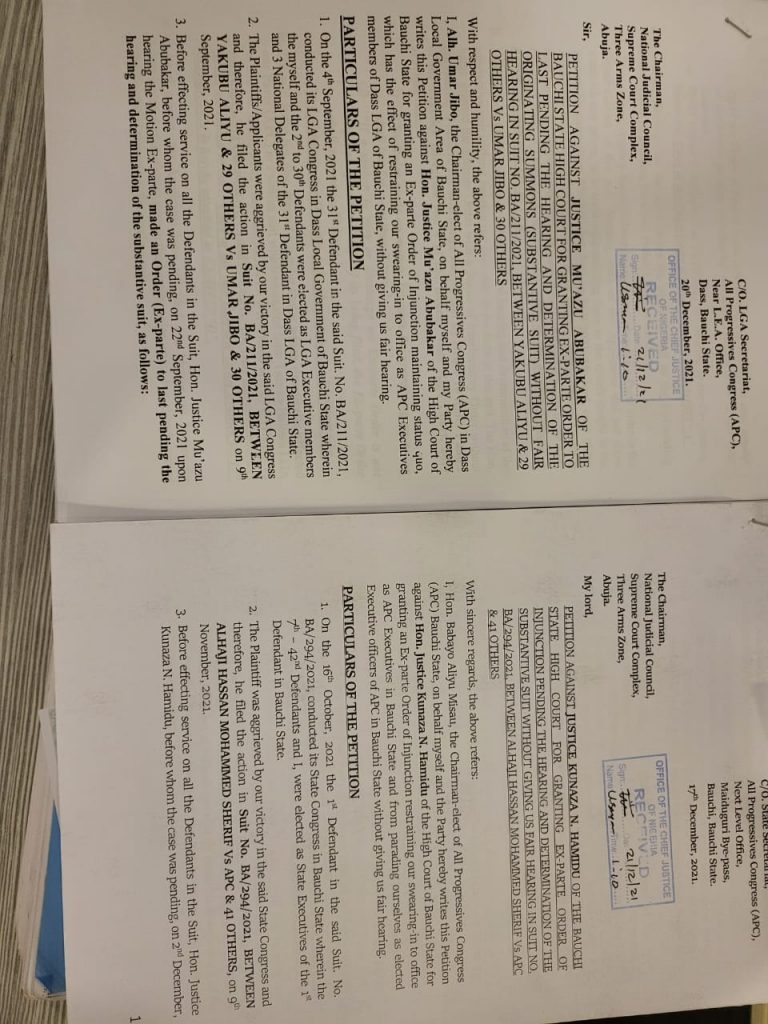 Comrade Timi Frank, who used to be the deputy...
Read more
More

The Bauchi State Chapter of the ruling All Progressives Congress (APC) has petitioned the National Judicial Commission (NJC) against two judges of the state High Court for granting ex parte orders contrary to procedures and conventions.

The petitions, dated 20th December 2021, written against justices Mu’azu Abubakar and Kunaza N. Hamidu, were submitted to the Office of the Chief Justice of Nigeria (CJN) and Chairman of the NJC, Justice Mohammed Tanko on 21st December 2021.

The petitioners, Alhaji Umar Jibo the APC Chairman-elect in Dass Local Government Area of the state and Honourable Babayo Aliyu Misau, the Chairman-elect and his executive members alleged that the judges granted ex parte orders that would last till hearing and determination of the substantive suit without giving them a fair hearing.

According to the petitioners, “By law, ex parte orders are only granted to preserve the res and last only for 14 days.”

They noted that in the instant cases, the two Justices separately gave orders in the suits number BA/294/2021 and BA/211/2021, respectively, which affect their swearing-in, since both orders separately would last up to the hearing and determination of the suits file by aggrieved persons over their victory.

They then appealed to the NJC to do justice to their claims against the two judges.

DAILY POST reports that two judges of the Bauchi State High Court separately restrained the chairman of APC caretaker committee, Governor Mai Mala Buni of Yobe State, and the party from inaugurating Hon Babayo Misau-led executive members who were elected recently and the Umar Jibo-led executives of the party in Dass LGA.

The court also restrained the Minister of Education, Malam Adamu Adamu, and former Speaker of the House of Representatives, Hon Yakubu Dogara, and their privies, agents, cohorts and representatives in whatever capacity from administering the oath of office or according to the Misau and his backroom ‘recognition’ as Bauchi APC leaders in the state.

The court further restrained Misau and those who emerged as APC leaders in the state along with him from “parading themselves in whatsoever manners or means and or acting in whatever capacities or names called as Bauchi State executive officers of APC pending the hearing of the substantive suit filed”.