Stop Blaming Us For Your Failure, Speaker Dogara Fires Back At President Buhari 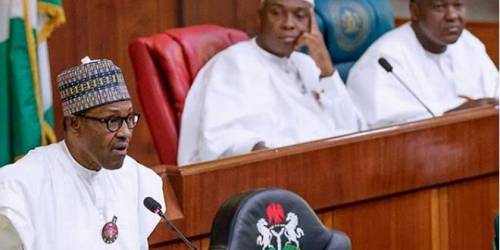 Yakubu Dogara, the Speaker of the House of Representatives, has blasted President Muhammadu Buhari for always blaming people for his personal failings.

Buhari, while speaking, on Monday in an interview broadcast on the Nigerian Television Authority, NTA said “I asked them how they felt to hold the country at ransom for seven months without passing a budget. Unfortunately, they were not hurting me; they were hurting the country. So, really, in terms of patriotism, I think I rated them very low indeed.”

Reacting to the allegations in a statement on Tuesday, Dogara said: “His first budget was the 2016 budget, which was submitted on December 22, 2015, exactly nine days to the end of the fiscal year.

“The minimum time the National Assembly requires to pass a budget is three months. But he presented it just nine days to 2016’ and that ‘what Nigerians didn’t know and the President won’t say is that the Executive through the various ministries continued to propose additional projects to be included in the 2018 budget even as at April and May which further delayed the passage of the 2018 budget. These were communicated officially and if anyone is in doubt, the letters are there with the dates they were written and received. But here’s Buhari blaming the National Assembly.’

“President Muhammadu Buhari a few days ago, in his usual characteristics of self-righteousness, and buck-passing blamed tardiness in the passage of budgets by the National Assembly for the delay in the completion of projects across the country by his government.

“Even though buck passing and blame game is not new to Buhari as it is now his stock in trade; in the past few days and weeks, there is no day that passes without the President blaming others in a desperate move to exonerate himself from any blame or failure of the Executive under his leadership to execute projects across the country.

“In fact, very recently, Buhari blamed all his predecessors for failing to build infrastructure. And I wonder why? It was the general consensus that the former employees didn’t perform as expected and that was why Nigerians hired him for a job he has sought for four conservative times but here he is blaming the same people he replaced. If you are the boss of ” Nigeria limited”, what will you do this employee?

“Some weeks ago, he even blamed the media for failing to showcase his achievements.

“I’m very disappointed with the Nigerian press. They didn’t give this government the credit of the go back to the land programme,” he said on 26 October. Time and space would not permit me to list all his “blaming”.

“However, it is disingenuous for President Muhammad Buhari to blame the National Assembly for his government’s inability to implement budget and execute projects that affect the lives of Nigerians in the last three years.

“To set the record straight, this is a President who, from the inception of his government didn’t show any sign that he was well prepared and ready for the job he sought for four times in 16 years and for which we voted for him.

“For instance, it took him six months, yes six months not six weeks to form his cabinet. It also took him two years to appoint board chairmen for most government agencies. This is was his greatest undoing and was principally responsible for plunging Nigeria into recession because activities in Ministries, Departments, and Agencies of government were brought to a half for the period since civil servants could not take decisions due to the absence of political heads in a country where public sector spending drives the economy. At a point, he even said he was happily working with civil servants because ministers or politicians were noisemakers because “they are only there to make a lot of noises”, he told a French television station in September 2015.

“Now, after three years, with the election in three months, the President is at it again, exonerating himself from the apparent failure of his government thereby throwing the blame right at the doorstep of the legislature. But facts don’t lie and they could be stubborn and here are the facts.

“Since his assuming office, the president has been unable to present the budget on time. His first budget was the 2016 budget which was submitted on December 22, 2015, exactly nine days to the end of the fiscal year.

“The minimum the National Assembly requires to pass a budget is three months. But he presented it just nine days to 2016.

“However, his ministers refused to appear before National Assembly committees to defend the budget for five months thereby delaying the passage.

“It was after the leadership of the National Assembly sought the President’s intervention on March 16, 2018, that the ministers reluctantly appeared before the committees, an exercise that takes at least one month to complete.

“In fact, some of them who felt they were super ministers sent in their permanent secretaries.

“What Nigerians didn’t know and the President won’t say is that the Executive through the various ministries continued to propose additional projects to be included in the 2018 budget even as at April and May which further delayed the passage of the 2018 budget. These were communicated officially and if anyone is in doubt the letters are there with the dates they were written and received. But here’s Buhari blaming the National Assembly.

“Intact, the Executive admitted its failure and inability to abide by the law on August 24,2018 when former minister of Budget and National Planning, now minister of finance, Zainab Ahmed disclosed that the Federal government will present the 2019 budget in September in a bid to restore the budget circle from January to December but here we are in November without the budget estimates before the lawmakers. See link https://www.dailytrust.com.ng/fg-to-submit-2019-budget-in-september-267246.html.

“Buhari’s Failure/Refusal to assent to budget submission Bill ‘In a bid to address the issue of late budget presentation and passage, the National Assembly passed a constitutional amendment bill that requires the President to submit the Appropriation Bill not later than 90 days to the end of the financial year but unfortunately, very, unfortunately, the president has vetoed the bill.

“Veto of National Assembly Budget Office Bill ‘In an effort to improve the institutional capacity of the Parliament to process and pass budget expeditiously, the National Assembly Budget and Research Office (NABRO) establishment Bill was passed into law. It was loosely modeled after the American Congressional Budget Office (CBO). Again, President Buhari has also vetoed the Bill.

“Lack of Adequate Consultation ‘Under a Presidential system of government like ours where the doctrine of separation of powers and principles of checks and balances is well enshrined in our constitution, wisdom presupposes that the Executive at all time engages the legislature on all issues that requires legislation in order to have their buy-in even before it is presented to the parliament formally.

“The three President’s before Buhari, from 1999 -2015, Olusegun Obasanjo, Umaru Musa Yar’adua and Goodluck Jonathan despite their failings sustained this tradition which is necessary for harmonious relations between the Executive and the Legislature and smooth running of government. Under this, it is expected that the President meets with the leadership of the two chambers (Body of Principal Officers including members of the opposition) and brief them on the details of the budget and key projects he would want to execute. They, in turn, would brief their colleagues while the MDA’s will then engage the committees over sighting them in pre-budget session. President Shehu Shagari used to hold such meetings monthly.

“Doing this would have helped in reducing the time it takes to pass the budget because even before it is presented, the MPs would have been well informed about it and their inputs are taken into consideration at the preparation stage by the various MDAs. Unfortunately, this too has not been done in the last three years. “National Assembly Not A Rubber Stamp Parliament”

“The National Assembly has repeatedly challenged the Executive to approach the Supreme Court to seek interpretation on the constitutional powers of the legislature over budget, but up till now, they have failed to do so. Until then, the judgment of the Federal High court in FHC/ABJ/CS/259/2014 delivered on March 9, 2016, which was not appealed by either party stands.

“This is what his lordship, Hon Justice Gabriel Kolawole said in delivering judgment in the suit by Femi Falana SAN “the National Assembly was not created by drafters of the Constitution and imbued with the powers to receive ‘budget estimates’ which the first defendant is constitutionally empowered to prepare and lay before it, as a rubber stamp parliament. The whole essence of the budget estimates being required to be laid before Parliament is to enable it, being the Assembly of the representatives of the people, to debate the said budget proposals and to make its own well informed legislative inputs into it.”