According to BBC Pidgin, Gumi received the COVID-19 jab in Kaduna State. 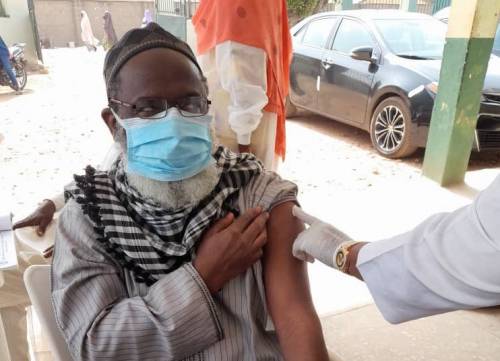 Nigerians generally have been wary of the COVID-19 vaccine due to controversies surrounding it.
The National Primary Health Care Development Agency, an agency of the Nigerian government, had confirmed that only one person in Kebbi and Taraba states each had after about two weeks received the Astrazeneca COVID-19 vaccine.
The agency did not say if the only person was the state governor.
But it added that over 300,000 people had received their first doses of the Oxford-AstraZeneca COVID-19 in Nigeria.
The NPHCDA said on its official Twitter on Friday, noting that those vaccinated so far in the country were 9.5 per cent as at March 26, 2021.
It said over 374, 585 people had been vaccinated across 34 states and the Federal Capital Territory.

The Nigeria Immunisation Agency data showed that all states except Kogi have commenced vaccination against the infection in the country.
It said Kogi State was not supplied with the vaccines because their cold store was still under repair following vandalisation during the EndSARS protest.
It stated that Lagos State, the epicentre of coronavirus in the country, had vaccinated almost 92,000 people, making it the highest in the country; followed by Ogun with 36,953, Bauchi – 31,321, Kaduna – 29,426, Jigawa – 22, 420 and Kwara – 20,060.
The agency noted that “states with the lowest number of vaccinated people were Kebbi, Taraba, with one each, while Abia had four.”