Ahead of the ruling All Progressives Congress (APC) governorship primaries in Plateau State, 18 aspirants have threatened to dump the party over the alleged planned imposition of a particular aspirant by Governor Simon Lalong and the party leadership.

The aspirants also warned that they will not accept any concurred list of delegates by the party, but advised the party leadership to adhere strictly to the APC guidelines for the emergence of delegates.

This was disclosed by Chief Amos Gizo, an aspirant who is also chairman of the aspirants, while briefing journalists in Jos, the state capital.

Gizo said, “There should be no imposition of any kind and consensus will be done by the aspirants themselves.

“We all agreed that any aspirant that becomes the consensus candidate will be supported by all.

“We all agreed that whoever emerges will have the blueprint of other aspirants to be embedded into his manifesto and programs.

“We all agreed that delegates will emerge by either the consensus of the aspirants or election must take place at the various designated wards and local governments.”

“That no concurred list will be accepted”, he maintained.

“The party leadership should ensure strict compliance to the guidelines of the party for the conduct of the ad-hoc delegates, and our position has been communicated to the party leadership by our chairman Chief Amos Gizo and Secretary, Dr Danyaro Sarpiya by our mandate’, he stressed.

He however said, “This press conference is necessitated by what looked like a rumour, but has been evident by the body language of the State Governor, Simon Lalong, with members of the first family (wife and brothers), his father-in-law, Mr Cyril Tsenyil (the Accountant General of the State).

He added that “Others include; Mr Festus Fuanter, the Deputy National Secretary of APC, and anchored by the member representing Pankshin/Kanke/Kanam at the National Assembly, Hon. Yusuf Adamu Gagdi, to subjugate the collective will of members of APC by imposing a candidate on members of the party in the person of Dr Nentawe Yilwatda Goshwe, which is unacceptable to all of us.

“We all believe this act of subverting democracy has express approval of the governor just to deny the people’s choice and foist an unpopular candidate that will cause misfortune to the party.”

“If the state party leadership allows those bent on subverting our nascent democracy to thrive, it shall put the state chapter into crisis and we the 18 aspirants have vowed and agreed to dump the party with our teaming supporters for any party of our choice”, he warned. 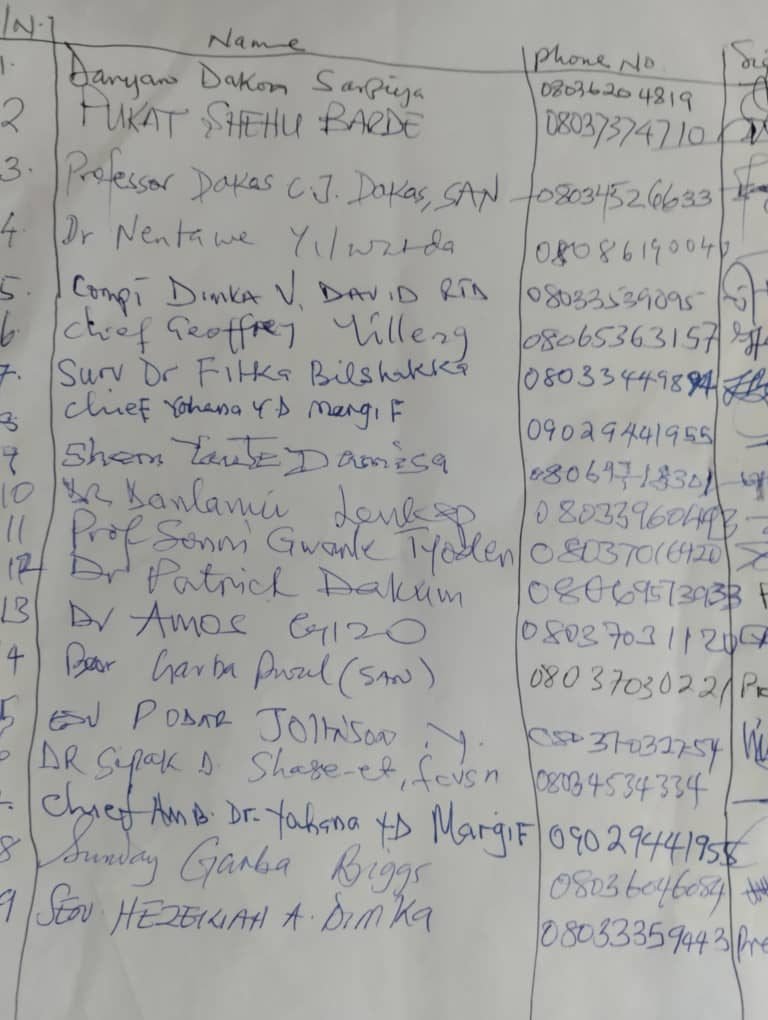