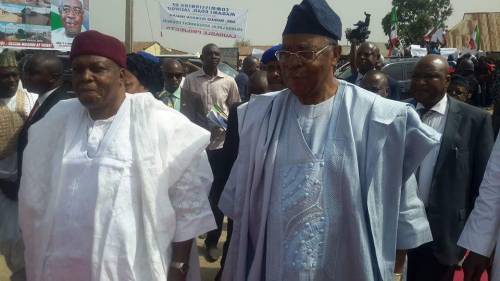 A civil society organisation under the aegis of Guardians of Democracy and Development on Wednesday staged a protest in Abuja to condemn communal violence and killings in Taraba State.

The group also called for the investigation and prosecution of the state governor, Darius Ishaku, and Theophilus Yakubu Danjuma for allegedly fuelling the crisis in Taraba.

Convener of the protest, Comrade Adodo Solomon, alleged that some politicians working behind the scene were inciting the crisis and arming militia groups for political gains.

Solomon said, “Today, the Tiv Youth Council and the Guardians of Democracy and Development alongside all the civil society groups have gathered to forward an open letter to President Muhammadu Buhari to act decisively and deal with all individuals fomenting crisis for political gains.

“A former Minister of Defence, T.Y Danjuma, in an open call for anarchy and wanton violence, called on his people to pick up arms and wage war at any instance of provocation.

“Nothing was done to this elder statesman for this inflammatory statement.”

Solomon accused Danjuma of arming and training the ‘Jukuns’ in tactical warfare to worsen the crisis between them and the Tiv in Taraba State.

The group said that he perpetrated the act in connivance with Governor Ishaku, leading to the upsurge of violence in the state.

He added, “The recent upsurge in violence and communal war in Taraba State calls for deep concern and the investigation of the financiers, promoters and perpetrators.

“Killings carried out by Jukun militia groups at the Federal University Wukari, is one too many and we demand urgent and decisive action.”