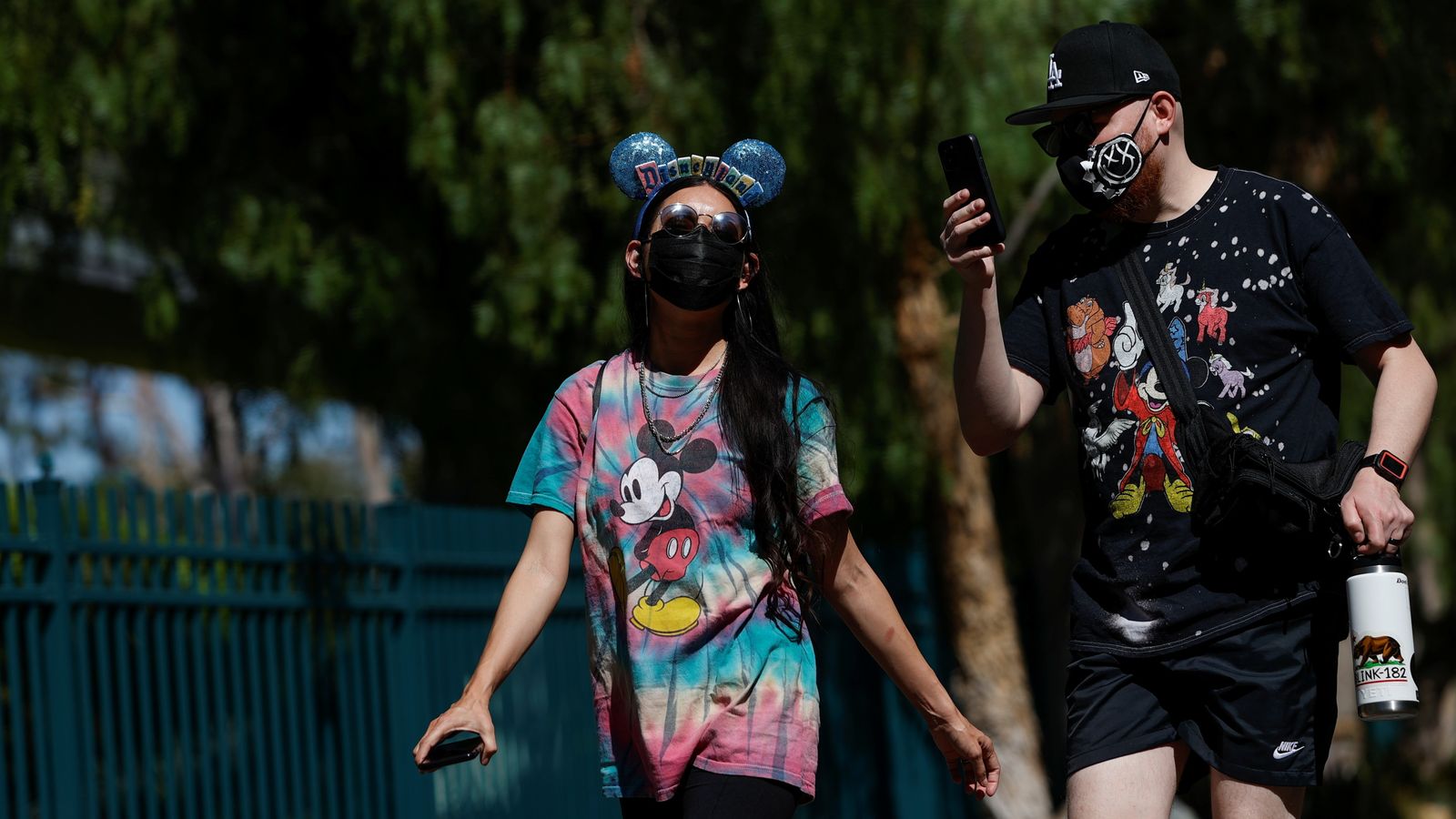 Disneyland has reopened for the first time in over a year – as it was revealed more than 100 million Americans have been fully vaccinated against COVID-19.

Disney fans who visited cheered and screamed as the Southern California theme park opened its gates for the first time in 13 months, when it was forced to close at the onset of the coronavirus crisis.

The Disneyland news is seen as a powerful symbol of the US recovery from the pandemic, even though the park is currently only allowing in-state guests and operating at just 25% capacity. And it comes just months after the company slashed 28,000 jobs from its theme parks across the US.

Disney’s other US theme parks, in Florida, were only closed for a couple of months last year – but authorities in California have enforced far tougher restrictions to combat the disease.

The reopening and similar steps elsewhere around the country show increasing optimism as COVID-19 deaths tumble and the number of vaccinations grow.

While the overall number of lives lost to COVID in the US is more than 575,000, deaths have fallen to an average of about 670 per day from a peak of around 3,400 in mid-January.

And according to the Centers for Disease Control and Prevention (CDC), 39% of the nation’s adult population has now been fully vaccinated – totalling more than 100 million people.

More than 55% of adults have received at least one dose. However, officials have said around 8% of those who have received one dose of either the Pfizer or Moderna vaccine have not returned for their second shot.

Dr Anthony Fauci, the nation’s top infectious disease expert, said it was important to complete the course to gain maximum protection against the coronavirus.

“Make sure you get that second dose,” he said at a White House briefing.

The immunisation drive has slowed in recent weeks, even as vaccinations have been thrown open to all adults.

Experts believe a combination of better weather and falling infection numbers will make it harder to reach people who have not yet been vaccinated.

Meanwhile, cruise lines are celebrating the news that the CDC is committed to resuming sailing in the US by the middle of summer and is adjusting some of the rules to help speed up the process.

Earlier this week, the CDC said in a letter to the industry that it will let ships cruise without going through practice trips first if 98% of the crew and 95% of the passengers are fully vaccinated against COVID-19.

“The voices of community leaders and the wider cruise community are being heard – and we are very grateful for that,” said Laziza Lambert, a spokeswoman for the Cruise Lines International Association.

US cruises have been shut down by the pandemic since March 2020, with Disney one of the firms affected.

In New York, mayor Bill de Blasio said he expects to see COVID restrictions lifted and the city “fully reopen” by 1 July thanks to rising vaccination rates and decreasing hospitalisations.

“We are ready for stores to open, for businesses to open, offices, theatres, full strength,” he told MSNBC.

However, New York governor Andrew Cuomo has insisted that decision is his to make – and that the date could be brought forward.

“I don’t want to wait that long. I think if we do what we have to do, we can be reopened earlier,” he said.

In Michigan, which in recent weeks became the worst hotspot in the US, numbers are finally showing improvement and governor Gretchen Whitmer has announced a plan to link the lifting of restrictions to the state’s vaccination rate.