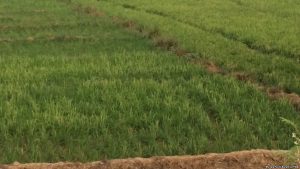 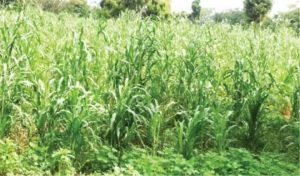 Anxiety over poor harvest in this year’s farming season following a dry spell experienced in Jigawa State has now been replaced with hope of bumper harvest as crops are now flourishing following appreciable amount of rainfall recorded in the state in the recent past.
The farms that were an eyesore in the past have now picked up as farmers have replanted some of the crops that could not live through the dry spell period while those that suffered shock have revived and everywhere is looking green.
In June, Daily Trust, reported that there was growing apprehension among farmers in the state as the drawn-out before the beginning of the rainy season necessitated late planting of crops. This is because part of the rainy season fell under the dry spell period.
The concern over the dry spell was largely on those varieties that require longer period of rainfall before maturity. The first heavy down pour that was recorded in May raised hope among farmers for a good farming season and crops that take longer period before maturity – sorghum, millet, cow pea and ground nut – were the most planted.
It was reported that as a result of the dry spell, which lasted for about six weeks in between the last rainfall and its resumption about three weeks ago, most of the legume varieties died while the other cereals also dried up.
Speaking, an engineer turned farmer, Auwal Garba Ibrahim, said at the beginning of the rainy season, the situation was frightening as all hope for a bumper harvest were dashed, adding that the cessation of rainfall at the early part of the cropping season left most farmers panicking
He explained that in last year’s farming season, many farmers lost their crop to lack of rainfall that was recorded earlier than expected and that in order to avoid same experience, farmers had to mobilize themselves early this year. He said with the early rainfall, this year, crops that were planted late last year which could not reach maturity while the scanty rain lasted, were planted early this year.
The engineer stated that last month was one of the most uncomfortable period for farmers in Jigawa State as everywhere was becoming dry and even the drought resistant crops started succumbing to the severe dry spell period with many of them slowly drying up.
But the engineer-turned-farmer could not hide his joy as the favourable change in the climatic condition unfolded, saying those crops that could not sprout were replaced and have since started germinating.
Engineer Ibrahim, who abandoned the civil service for farming, said there would be better yield this year compared to the last cropping season, arguing also that this year, pests invasion was not experienced as was the case last year and that fertiliser was not only in sufficient supply but also available at government controlled prices.
“Our fear is that most of the farmers that incurred losses at the beginning of the season have hardly recovered. What we are saying is that they used their little savings to start the season and if they are not supported to come back to their feet that will affect harvest at the end of the year in terms of quantity.
Also speaking to Daily Trust, the chairman of Ringim Local Government Area chapter of the wheat farmers association, Hamisu Salisu Dabi, said there was no financial support in term of loan to farmers as was the case in the two previous cropping seasons adding that in the past, government extended assistance to farmers in form of agricultural input and financial loan.
Although Dabi blamed some farmers for defaulting in repayment which made government to shut its doors, he added that the absence of such support would affect agricultural production as many will not be able to farm this year.
The chairman of the wheat farmers said government should not withdraw support but that the processes involved in giving out loans and recovery should be reviewed to be accessed only by genuine farmers that are credit worthy.
“Total withdrawal of such support for the peasant farmers could be detrimental to the present campaign on food security, especially at this stage that the country is clamoring for self-sustenance. I am, therefore, making a passionate appeal to the authorities concerned to revisit the situation in order to map out a new strategy for ensuring that the policy remains.”