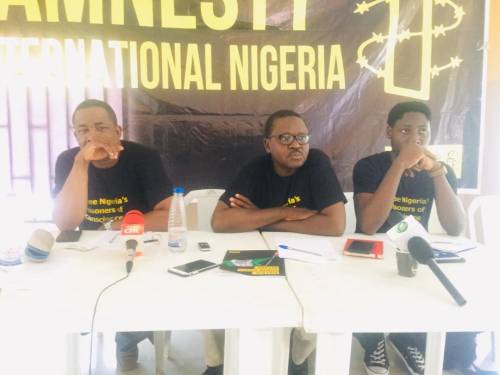 Human Rights group, Amnesty International, has said that the Nigerian and Cross River State governments were manipulating the criminal justice system to repress dissenting voices in violation of the 1999 constitution as amended as well as international and regional human rights treaties.

Amnesty International also said that the continued detention of Agba Jalingo, a journalist who risks a death sentence if convicted for four charges bordering on terrorism and cybercrime preferred against him, was a “stain on the image of Nigeria.”

“While Agba Jalingo is detained for his critical opinions, both Cross River and Federal governments are collaborating through the manipulation of the criminal justice system to keep him behind bars,” said Amnesty International’s media manager, Sanusi Isa, during a press conference on Thursday in Calabar.

Isa described the collaboration as “unfortunate,” and noted that, “Cross River State is fast becoming a den of repression because more people are getting arrested for expressing their opinions”.

“Governor Ben Ayade of Cross River State and the government of President Muhammadu Buhari must stop filing bogus and politically motivated charges against critics and start listening to what they have to say.

“The case of Agba Jalingo is just one of many cases of blatant violations of the right to freedom of expression and media freedom in Cross River State and several parts of Nigeria.

The rights group said it was also concerned that Jalingo’s trial “falls short of International standards of fairness, especially because the court had allowed witnesses to be masked and the trial to be held in secret.”

While calling for an end to the “sham trial” and “the flawed charges” to be dropped; Amnesty said it will continue to “push for Agba Jalingo’s immediate and unconditional release and work with other NGOs to hold the Cross River State authorities to account for the increasing assault on human rights.”

The rights group had on November 20, 2019 declared Jalingo alongside #RevolutionNow convener, Omoyele Sowore, and Olawale Bakare as prisoners of conscience shortly after the #OneFreePressCoalition listed him at number 9 of 10 ‘Most Urgent’ cases of threats to press freedom around the world.

Jalingo was arrested in his Lagos residence on August 22, 2019 despite repeated statements that he will honour a police invitation bordering on his article published in July where he demanded the whereabouts of the N500m approved and released by the Cross River State Government for the floating of Cross River Microfinance Bank.

He was then ferried to Calabar by road in what colleagues and family describe as a tortuous 25-hour journey where he arrived on the 24th.

He will then spend 32 days detained at a police black site facility where he collapsed twice due to ill health before being arraigned on initial charges of treason, treasonable felony, terrorism and attempt to topple the Cross River State Government on September 25, 2019.

Justice Simon Amobeda then remanded him at the Calabar prisons where he has spent 134 days so far after being denied bail twice.

Cross River governor, Benedict Ayade, has been fingered as being behind his ordeal, an allegation the governor and his aides denied.

Ayade had also accused Jalingo of blackmail in a recent chat with journalists, an allegation he later retracted and apologised claiming he got his facts wrong.