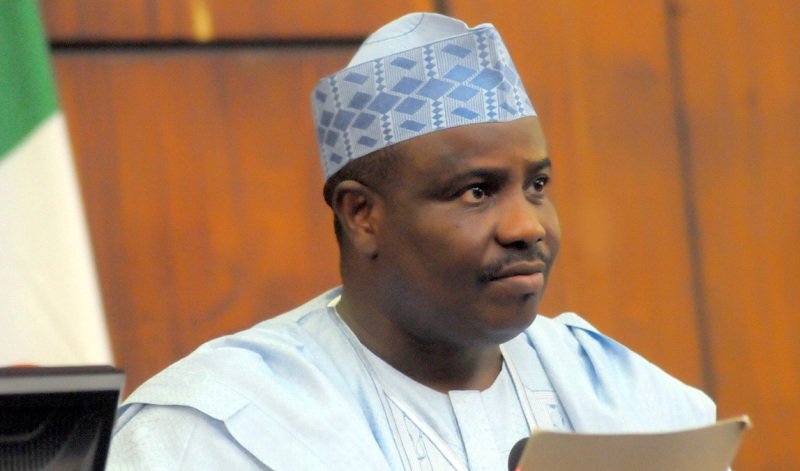 Former Speaker of the House of Representatives and Governor of Sokoto state, Aminu Waziri Tambuwal, has condemned in strong terms Tuesday’s invasion, and siege to the National Assembly complex in Abuja by armed security operatives.

He also applauded the immediate removal from office of the Director-General of the Department of State Services, DSS, whose personnel were deployed for such flagrant affront on democracy and the elected representatives of the Nigerian people.

He described the action as a direct and unacceptable contempt for the sanctity of the legislature which is the bastion of democracy.

He said that as a former lawmaker and immediate past Speaker of the House of Representatives, he was confounded that anyone could contemplate and execute such an act, commending the Acting President, Professor Yemi Osinbano for his intervention.

He also called on the international community to rise in condemnation of the action, which he described as a very dangerous threat to the survival of democracy in Africa’s most populous country.

According to the Governor, “It is wrong and unconscionable for security operatives of any 21st Century nation to act in ways suggesting democracy and the will of the people could be held to ransom.”

He described the development as an attempted coup against the Legislature that requires full and unremitting investigation.

He called on Nigerians to always remember that it is their sacred duty to ensure that only their duly-elected representatives determine their fortunes, saying that no one should bring down the hard-earned democratic freedom Nigerians fought hard to achieve.

“Every Nigerian must rise and stand up to defend democracy now or suffer the consequences of a Police state,” the Governor said.

He also commended the legislators who refused to be intimidated, describing them as heroes of democracy.

Governor Tambuwal had dumped the All Progressives Congress (APC) for the PDP last week.