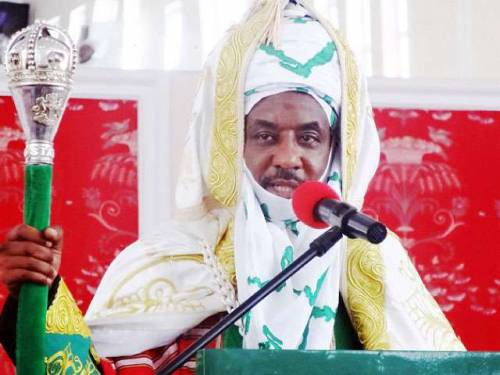 Worried by the level of decadence and decay in the country, the Emir of Kano, Muhammadu Sanusi II, has advised Nigerians to stop electing into public office leaders without education. Sanusi said Nigerians had often made the mistake of electing leaders who had no education, saying such leaders cannot give what they do not have.

The former Governor of Central Bank of Nigeria (CBN) spoke yesterday at the sixth convocation ceremony of the Nile University, Abuja, where he was conferred an Honorary Degree of Science alongside the Alaafin of Oyo, Oba Lamidi Adeyemi III.

Sanusi urged the electorate to always elect into public offices leaders who “are educated and know the value of education.”

He said the federal government should invest the trillions of naira it spent on subsiding petroleum products in the education of the country’s youth.

The Emir said, “We have to take an interest in the quality of our leaders and representatives, in the level of education. If you look around this country, at many levels of leadership, we have elected and we have chosen to elect people who do not have an education. And because they are not educated, they cannot give education.

“We need to lay more emphasis on the quality of people we elect to executive and legislative offices and we need to make sure that those to whom we entrust policy are themselves educated and know the value of education.

“Let us invest more in education and let us give up some of the privileges that we have, such as the trillions we are spending subsiding petroleum products. That money should go into educating our young people.

“We are spending too much money on roads and bridges and trains and too little money on educating our children. Let us educate these young people and they will build the roads, trains and the bridges. We do not need to invite the Chinese to do that for us.

“I do understand sometimes that if a governor does not build roads or bridges, he is seen as not having performed by the people.

“We build all these highways and there are more pedestrians on the highways than cars and those pedestrians are most often people without education and help. Development is first and foremost about people.”

The emir criticized the northern leaders for their failure to provide an enabling environment for children to attend schools.

Earlier in his remarks, the Vice Chancellor of the university, Professor Huseyin Sert, said 21 students were awarded First Class degrees out of the 365 graduands.

Sert explained, “In this 2017/2018 session, we are glad to celebrate our sixth convocation ceremony with a total number of 365 graduands made up of 21 first class honors, 67 Second Class Upper, 96 Second Class Lower and two Third Class.

“Indeed, the turnover of graduands from the university has justified our vision and mission statement of producing quality graduates who shall be full of knowledge, skills, and experience to contribute to technological and economic development nationally and internationally.

“The university expresses its gratitude to all those that contributed to the success of this occasion which enabled us to actualize our dream of being one of the best tertiary institutions in the world. We particularly felicitate with both graduating students and their parents for their high sense of duty and commitment in making their stay in the university a fruitful one.”

The Alaafin of Oyo commended the institution for the award, saying it will spur him to do more for society.