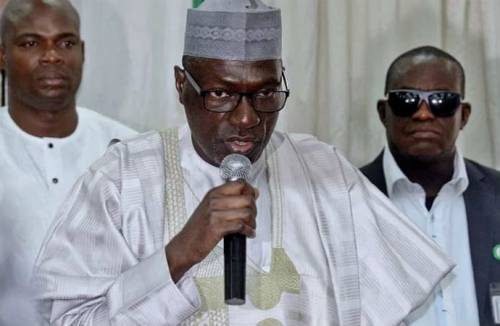 Contending the ticket with him are Senator Suleiman Othman Hunkuyi who, himself failed to secure the PDP’s governorship ticket and Ahmad Rufai Shehu (Ubale) the only PDP member who initially obtained the party’s nomination form.

Shehu has approached the Federal High Court, Abuja to restrain the party from taking the ticket away from him.

He asked the court on Friday to prevail on PDP and the Independent National Electoral Commission (INEC) to stop the party from fielding either Makarfi or Hunkuyi.

According to investigation, both Makarfi and Hunkuyi are banking on the Kaduna North Senatorial ticket as their Plan B.

Following the loss of presidential ticket, some aspirants including the President of the Senate, Dr. Bukola Saraki, Sen. Rabiu Kwankwaso, Governor Aminu Tambuwal, were allowed to retain their elective offices.

But Hunkuyi has vowed not to concede Kaduna North Senatorial ticket to Makarfi.

A top PDP source said: “We have a fresh challenge at hand in Kaduna PDP. There is an ongoing battle between former Governor of Kaduna State, Ahmed Mohammed Makarfi and his long time political enemy, Senator Suleiman Othman Hunkuyi over the party’s senatorial slot for the Kaduna North Senatorial District where the duo hailed from.

“Both Makarfi and Hunkuyi (who is a serving Senator) have lost out in the recently concluded PDP presidential and governorship primaries in Kaduna State.

“Makarfi’s preferred aspirant in the Kaduna Governorship Primary, Isa Ashiru defeated Hunkuyi who defected to the PDP from All Progressives Congress (APC) after a political battle with Governor Nasir Ahmad el-Rufai.

“Makarfi, Hunkuyi and Ashiru are from the same federal constituency which is Kudan/Makarfi.

“The only party member, Ahmad Rufai Shehu with the senatorial form has been screened and waiting for the primaries, is from Zaria LGA. In fact, going by INEC deadline, Shehu is the PDP’s automatic candidate for Kaduna North Senatorial District.”

“While the National Chairman of the party, Prince Uche Secondus is backing Makarfi (who was his predecessor). Those in Hunkuyi’s camp are claiming that they have the support of the National Leader of the party. Dr. Bukola Saraki.

“Our leaders are insisting that Makarfi should be honoured for stabilizing the party. The PDP governors also failed to fulfil their promise to compensate Makarfi for doing a yeoman’s job in giving PDP a second chance to survive again.

“These leaders said the conditions Hunkuyi gave for defecting from APC to PDP were to contest only for governorship. They said he can’t come home with a story of automatic senatorial ticket.

But Ahmad Rufai Shehu (Ubale), who was the only party member who obtained the nomination form for Kaduna North Senatorial District, filed an application on Friday at the Federal High Court, Abuja seeking to restrain PDP and INEC from nominating any other candidate.

He asked the court for an “order of injunction restraining PDP and INEC from fielding and sponsoring Hunkuyi and Makarfi or any other candidate for the 2019 Kaduna North Senatorial District seat without conducting primary election.

He said: “That the primaries for the Senatorial seat were scheduled to take place on October 2, 2018 but the election committee postponed same without any justification.

“I wrote a letter to the Chairman Election Petition Committee of PDP, Kaduna State on October 6 and submitted it on the 8th of October.

“I have not received any response from the Chairman Election Petition Committee of PDP, Kaduna State with respect to the aforesaid letter.”

He urged the court to declare as follows:

*A declaration that the claimant having purchased Nomination Form for Senatorial Primary Election of PDP for Kaduna North Senatorial seat (Zone 1) and has satisfied all the legal requirements to contest, is entitled to participate in the primary election of the party.

*A declaration that the claimant having completed and complied with every requirement of law and qualified to contest the primary for Kaduna North District is entitled to participate in the primary election of the party.

*An order that any act of 1st (PDP) and 2nd (INEC) defendants in fielding and sponsoring the 3rd (Hunkuyi) and 4th (Makarfi) defendants and / or any candidate without duly conducted primary for the senatorial seat is invalid and illegal to that effect.

*An order of injunction restraining the defendants(PDP, INEC, Hunkuyi and Makarfi) either by themselves, agents, privies, assigns, authorized representatives or howsoever described from fielding and sponsoring Hunkuyi and Makarfi and / or any other candidate for the 2019 Senatorial seat of Zone 1(Kaduna North) in Kaduna State without conducting primary election.

*An order of mandatory injunction directing the 1st Defendant(PDP) to conduct primary election for the Senatorial Seat of Zone 1, Kaduna State.