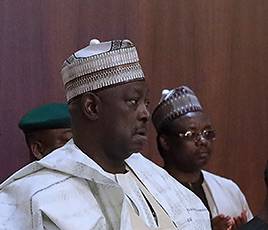 Former Secretary to the Government of the Federation, Babachir Lawal, has accused National Chairman of the All Progressives Congress, Adams Oshiomhole, of excluding the North-West and North-East geopolitical zones from the affairs of the party.

While addressing journalists in Abuja over the weekend, Lawal claimed that the ex-labour leader had not been attending meetings organised by the party’s national working committee.

He said, “This APC is funny, as we speak, the Chairman and his loyalists have suspended the Deputy National Chairman (North), the whole North, the Chairman, National Vice Chairman (North-West) which is the largest geographical zone with seven states has been suspended, he is no longer attending National Working Committee meetings.

“The National Secretary of the party who is from the north, from Yobe, has left to become governor of Yobe state as we speak, there is no firm decision to his replacement.

“For more than one year or so, a very substantial part of the country is not represented in the decision making.”