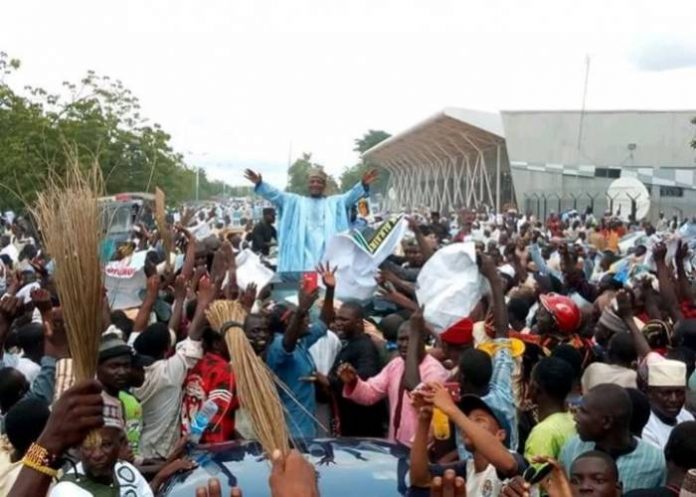 A former chief whip of the Sokoto State House of Assembly, Alhaji Bello Yahayya Wurno, three former elected chairmen of Rabah Local Government, a former special adviser to Governor Aminu Waziri Tambuwal and a former caretaker councilor have defected to the All Progressives Congress (APC) in the state.

They defected with thousands of the People’s Democratic Party (PDP) members on Saturday.

The decampees were received into the fold of the party at the flag off of the Sokoto State eastern zone campaign in Wurno and Rabah towns, respectively.

Speaking on their behalf, Alhaji Wurno said that they joined APC because of the prevailing justice, fairness and equity, as well as the tangible achievements of Senator Aliyu Magatakarda Wamakko when he was the governor of the state between 2007 and 2015.

Others were: a former member of the Sokoto State House of Assembly, Alhaji Ibrahim Tsamiya, former special adviser to Governor Tambuwal, Alhaji Husseini Gandi and a former caretaker councilor, Alhaji Tukur Mohammed, among others.

Speaking on their behalf, Alhaji Yusuf Mohammed Rabah averred that, they left their former party because, “there is no other party like the APC.”

The leader of the party in the state and Chairman, Northern Senators Forum, Senator Aliyu Magatakarda Wamakko, promised that they would be treated fairly like the older members of the party .

He described Rabah town as historic and key, as it is the home town of the Iconic leader of the North, the late Premier of Northern Nigeria, Sir Ahmadu Bello, the Sardauna of Sokoto.

Senator Wamakko, who represents Sokoto North senatorial district, also lashed at all those abusing and disparaging President Muhammadu Buhari, saying, “anybody doing so is either a fool, from a less prominent house or in disciplined, disrespectful family.”

The Chairman of the Campaign Council, Alhaji Muhammadu Maigari Dingyadi, and the state party Chairman, Alhaji Isa Sadiq Achida, expressed optimism that, APC would win the forthcoming general elections, at all levels, with a landslide victory .

The Coordinator of the Campaign Committee in the Eastern Zone, former Minister of Culture and Tourism, Senator Bello Jibril Gada, and Senator Ibrahim Gobir, currently representing the district, vowed to massively vote for the candidates of the party, at all levels.