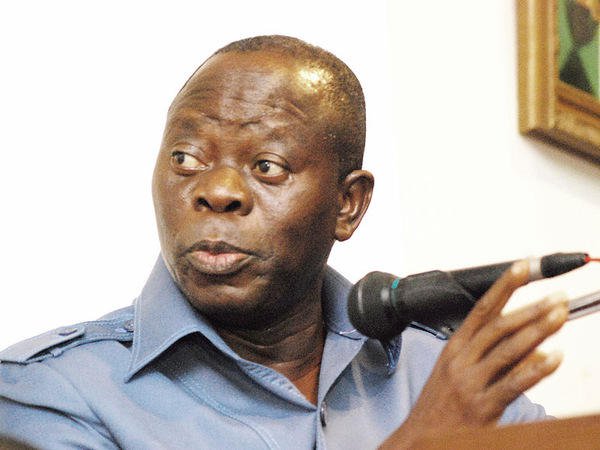 The ex-governor said this in reaction to former President Olusegun Obasanjo’s statement, advising Buhari not to seek re-election.

Oshiomole while speaking said the ex-president is not Buhari’s adviser, therefore, cannot dictate his decisions.

He disclosed this when he visited Buhari at the presidential villa in Abuja on Friday.

“I came to wish the president a Happy New Year and appreciate him for his leadership of the country because as an APC activist and loyalist, I’m a party man, to reassure him of my absolute and total support for his government and even for 2019,” he said.

“I think that in moments like this nobody should seat on the fence. Our country has challenges and there are huge temptations here and there. It is important he knows that he has men and women who even at this hour have huge confidence in his leadership ability.

“Everything taken to account, I believe that every Nigerian who wants us to sustain some of the renewed vigour to deal with one of the most challenging problems that Nigeria has faced, namely corruption and things like that, you cannot but appreciate the president and all that has been done under his leadership this past two years and some months.

“I’m not sure that President Obasanjo is one of the advisers of President Buhari. But I also recall with respect that the day President Obasanjo was swearing in some of his advisers, he did say that anybody who is his adviser can advise him, he will make his own decisions. And I think that principle still stands.

“As an All Progressives Congress (APC) loyalist, i visited the villa to assure the president of his absolute and total support for his government,” he said.