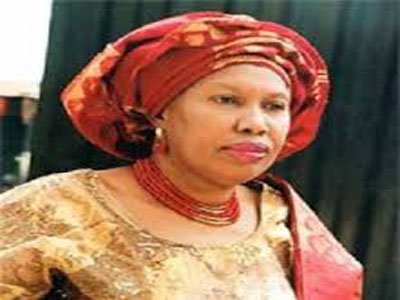 Taiwo, ex-wife of former President Olusegun Obasanjo, has said that her son, Olujonwo has abandoned his matrimonial home because his wife treats him like a houseboy.

She also said her son’s wife was expecting N300,000 monthly allowance from Olujonwo, who according to Taiwo, was a poor man earning just N100,000 monthly.

She said prior to the marriage, she warned the lady that her son was poor, but she insisted on getting married because of the family name.

Taiwo who has claimed Olujonwo was missing, told Punch that, “They should allow this man to come out and tell the whole world what he ’s going through in the hands of this girl.

“He’s being treated like a houseboy by this woman; like a slave that was bought; telling the man she’s the best he could have and that he could not have any other woman like her.

“I told her before she married him that my son doesn’t have money and that he’s a salary earner, so she wouldn’t place too much hope or expectation in the name, and that he earns N100,000 in a month .
Are you sure that is what he earns?

“She said she didn ’t know she married a poor man and it ’s the name he has, he doesn’t have money. She wants N300,000 and she doesn’t cook, she doesn’t take care of her husband.

“She doesn’t care and she would be threatening him, which is most disturbing.

“The young man reports everything to the father, yet, the man says he should stay married to the girl. If the relationship is okay , why would a man be running away from his matrimonial home every time?

“Everybody supported the date the wedding held, except me, not that I didn’t support the wedding, but the day it held, and that was why I spoke out about it. If you marry a woman and you find succour, comfort and warmth, will you be running away?”