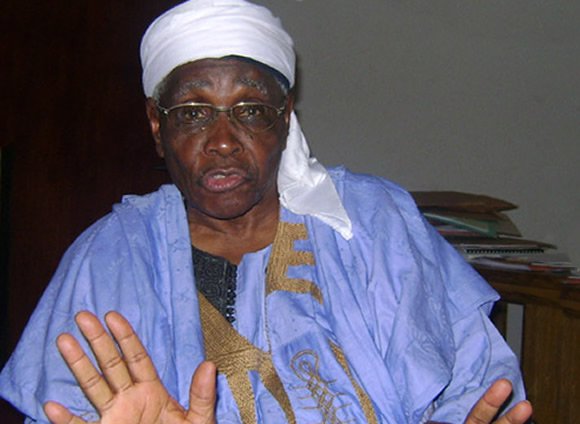 A former Vice Chancellor of Ahmadu Bello University, and spokesperson of the Northern Elders Forum, NEF, Prof. Ango Abdullahi has vehemently defended the incessant killings by Fulani herdsmen across the country.

Abdullahi also said that the herdsmen menace is politically motivated by the South to disrupt the politically united North ahead of the 2019 general elections, adding that this was how Boko Haram was introduced during Goodluck Jonathan’s government which led to his failure in the 2015 polls.

Justifying the killings, the Professor said that the herdsmen are killing members of their host communities in order to defend themselves, adding that the herders were free to take the cattle to any part of the country the same way an Igbo man does his business.

In a strong worded interview with Vanguard, Abdullahi said, “I have been involved in debates against some respected people from the southern part of this country who believe that this country is not balanced because the North is too big; because the North is too politically united, so there must be a way of disrupting this unity, and this is what we are seeing on ground today, and the elements that are being used are the Fulani herdsmen.

“This matter would be looked at properly; political alliances and so on are welcome. You don’t need to lose blood, or property to engage in political alliance or whatever you want, or still, you don’t need to introduce excuses that will lead to loss of lives. We saw this when the Boko Haram was on ground; they said northerners created the sect to disrupt former President Goodluck Jonathan’s government, which led to his failure in the last election, and so on.

“Now that Boko Haram is out of the way, the new excuse is the Fulani herdsmen. This is what is happening in other places except in areas that you are talking.

“We have seen what they called a new handshake across the Niger; it is political, and we have seen the mourning that has taken place in Benue and other places to show that the monolithic North is not in tandem with the Middle Belt; it is all politics. Our Middle Belters don’t need to take the agenda that appears to be a thing of distrust. We are not going to force anybody into a relationship politically or otherwise. We see this as a political agenda.

Asked if herdsmen are not the ones committing the murders, he added, “The truth is, if you want to kill me and I have a chance first, I will kill you, or you do want people to be killed and not defend themselves? By your reporting, you have denied them justice and government also has denied them justice by not going to arrest those that are killing them. So, they defend themselves.

On the herdsmen that kidnapped, raided and Chief Olu Falae’s farm ablaze, he said, “My uncle was kidnapped last week in Kaduna, my cousin’s children were also kidnapped and they had to go and find N2.5 million to pay. Why is Olu Falae case different?

“Because he was Secretary to the Federal Government? He is a Nigerian just like my uncle and my cousin whose children were kidnapped. The right of every citizen is important under the law. Why is he so special?

“What about the impunity of the people killing herdsmen? The herdsmen in Nigeria are reacting to the injustice meted out daily to them?

“You people, you Nigerians, including you who are biased, who are not prepared to protect the rights and interests of herdsmen. They are killed but not reported, that is not acceptable.

“Herdsmen operate in these places you mentioned because the country has denied them the traditional routes which the British created for them IN 1914 when they occupied this country because they realised that, like cars require tracks, herdsmen also require tracks they can use to graze and drink water.

“The British provided it for them and gazetted it but people have denied them these routes. So, where do you expect the animals to follow? They have to follow somewhere and the easy road is the one other people are using. We are all living in Nigeria.

Asked if he was trying to justify the menace of herdsmen, he maintained, “I am justifying it very strongly because herdsmen are being unjustly treated in this country.

They are businessmen. If an Igbo man could go to my state and set up a shop, why shouldn’t herdsmen operate elsewhere? Or are you the one who planted the grass the animals are feeding on? Are you the one who created the water they drink?

“The land belongs to Nigerians and herdsmen are Nigerians. If an Igbo man can go to the North and set up a business, why won’t herdsmen go to the South, including your village, to graze their cattle?

“Where we come from, you don’t pay for land, you only ask for permission to use it. That is why I said you people are biased against other people and that is why the peace of this country will be very difficult.”