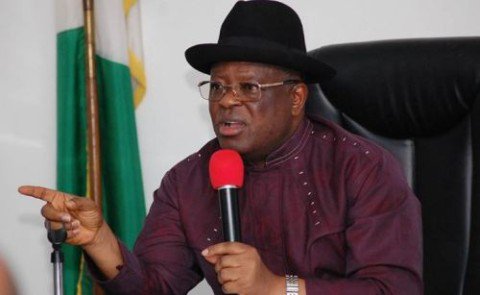 Confusion have continued to trail the resignation of the former Secretary to the Ebonyi State government, SSG, Prof. Bernard Odoh.

This is as the governor, David Umahi on Tuesday rejected his letter.

Recall that the governor had on Monday through his commissioner for information, Senator Emmanuel Onwe accepted the resignation letter of the ex-SSG and wished him well in his political career.

“His Excellency the Governor of Ebonyi State, Engr Dr David Nweze Umahi has received the resignation letter from the post of Secretary to the State Government tendered today the 2nd of April 2018 by Professor Bernard Ifeanyichukwu Odoh. The Governor thanks Odoh for his service to the state and wishes him well in his future endeavours”, he had said.

But, Umahi while addressing stakeholders of Ezza Ezzuna clan who protested against the resignation of the former SSG, at the government house Abakaliki, claimed that the resignation letter of the SSG was tendered during a public holiday and that as a result, it would not stand.

“On Monday, he sent me a text that his health was failing him and that he was going to resign and he will let me know.

“Before you knew it, I started hearing and seeing that he has resigned on social media. So, I am nullifying the acceptance that was done by government officials, including the appointment of his replacement because they were all done on public holiday,” he said.

He added that the acceptance of Prof Odoh`s letter and appointment of Mr Hyginus Nwokpu as the new SSG were all done in error.

The governor said the state government was investigating Mr Odoh for meddling in a murder case in his area before he tendered his resignation.

“When it (the resignation) happened, senior members of my cabinet came together and said let’s accept the resignation and wish him well. But I knelt down and said Lord, my heart is clean before this young man.

“I had called him on Saturday and said my son, murder case is very bad and we are doing investigation. I want you to come and see me so I can speak with you and advise you as a father and he agreed.

“Initially, he was denying that there was no problem, but towards the end of our discussion he said to me that he would like to make one or two comments but I said when you come you can make them. So, he switched off his phone till Monday.

“But by the powers conferred on me as the governor of the state, I hereby announce the sack of Prof Odoh as SSG and the investigation about meddling in murder case must be carried out thoroughly,” the governor said.

Reacting to the former SSG’s accusation that the state civil service was neglected, Mr Umahi said Mr Odoh’s accusation was far from the situation on ground.

“Go and check, if we are not the first in the payment of civil servants in the state, we will be the second. Go and find out, I challenge people all the time on this because we have the data.

“It is this state that gratuity of retired civil servants have never been paid until we came on board, now we have paid 40 percent of the gratuities to them. No Civil Servant is being owed salary and allowances,” he added.

Earlier in their separate remarks, Mr Lazarus Ogbee representing Ikwo/ Ezza south federal constituency condemned the resignation of the ex SSG and dissociated his people from his action.

Others who spoke during the protest included Mr Anayo Nwonu representing Ishielu/ Ezza North federal constituency, all serving political appointees, former senator Igwe Nwagu, some members of Ebonyi state house Assembly, all said that they were not in support of the actions of the former SSG.

Mr Odoh could not be immediately reached for comments on the governor’s accusations as his phone lines were switched off at the time of filing this report.