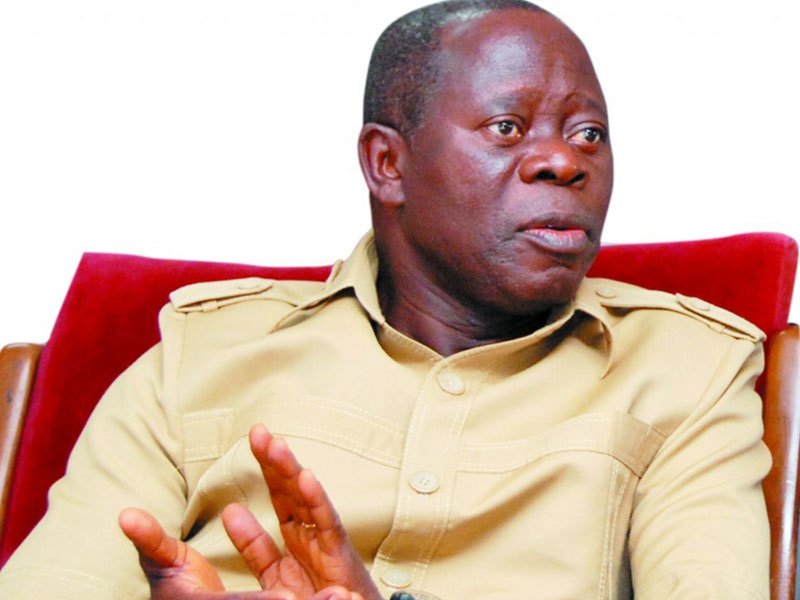 Former Edo Governor Adams Oshiomhole has advocated a win-win situation for the parties involved in determining a new minimum wage for workers in the country.

Oshiomhole spoke to journalists after a visit to President Muhammadu Buhari on Friday.

He however declined to comment on the amount being demanded as minimum wage by the Nigeria Labour Congress (NLC).

“I happen to know that as we speak we still have many of my comrades who work; at the end of the month they are not paid.

“And we have couple of my comrades who have retired at the end of the month they are not able to get their pension.

“It is not even about the numbers now whether it is one naira or one million (naira), they don’t simply get it.

“Those are huge challenges that should be addressed simultaneously because it is not the fact of what is approved that delivers comfort.

“It is the act of paying it and getting people to get it to their pockets and then take it to the market that makes the difference.

“Otherwise it is not a paper affair. Statisticians may be interested in the paper work but the real workers want what gets to their pockets”, NAN quoted him as saying.

Oshimhole noted that the fact that the President inaugurated a committee meant government recognized that the minimum wage could no longer take anybody home.

According to him, if the government is not convinced about that it won’t put machinery in place to address it.

“Conventionally, it is like a typical market place: those who sell will ask for a higher price and those who buy will demand a lower price.

“For transaction to take place the two parties have to agree otherwise there will be no transaction. I think that is what the tripartite committee is expected to do.

“It is not for me to pontificate about what the figure should be; I believe that we have enough brains in the NLC who know what the irreducible minimum should be.

“And the other tripartite side, the government, the private sector, will also understand what is it that they can leave it in a way that you have a win-win outcome,’’ Oshimhole added.