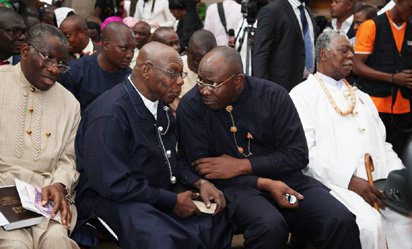 Recall that Obasanjo visited Jonathan on Friday in Otuoke.

The two ex-Presidents, Governor of Bayelsa State, Seriake Dickson and many other dignitaries joined other members of the congregation during the 9:00 AM church service.

Jonathan, while welcoming Obasanjo to his community church, said during the service that Obasanjo had promised to visit Otuoke in return for his recent visit to Obasanjo’s hometown, adding that he didn’t know it would come so soon.

He, however, called for peace and understanding among Nigerians.

Obasanjo, while presenting his goodwill message to the congregation, described Jonathan as Nigeria’s youngest former President.

He advised Nigerians to always speak the truth, stressing that he believed in the Biblical verse that, “only the truth shall set you free”.