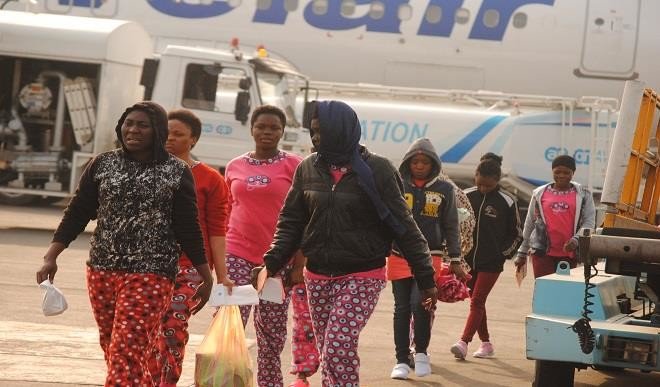 The National Emergency Management Agency (NEMA) has announced the death of one Towabola Adebayo, two days after she arrived Nigeria from Libya.

The deceased, an indigene of Ogun State, was among the 5th batch of returnees that arrived Port Harcourt International Airport on Tuesday, February 13.

Adebayo, according to her death certificate signed by the Casualty Officer, Akaa Chibuike, and made available to journalist on Friday, died Thursday evening.

The young lady was reported to have arrived the airport on Tuesday looking emaciated. She was immediately carried on the back by one of the staff member of NEMA and rushed to the hospital.

Examination by the medical officers at the hospital said she was resuscitated while on admission but her blood glucose level kept fluctuating.

She was admitted through the accident and emergency unit of the hospital after complaints of “several episodes of vomiting, abdominal pain and low-grade fever associated with weakness, anorexia, weight loss, frequent urination and increased thirst.”

The aircraft conveying the returnees including Adebayo touched down at the airport 1:10 a.m. on Tuesday morning. They were received NEMA and other agencies on behalf of the Federal Government.