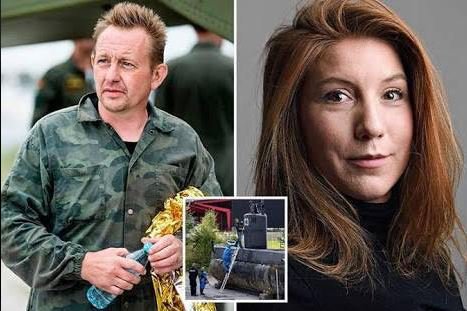 A Copenhagen district court on Thursday heard how Peter Madsen, a renowned Danish inventor recounted raping and dismembering the body of a Swedish journalist, Kim Wall without emotion in interviews with forensic psychiatrists.

The Guardian reports that the experts told the court that Madsen demonstrated no compassion for the deceased or her family.

“What do you do when you have a big problem? You divide it into something smaller,” Peter Madsen answered when psychiatrists asked about his decision to cut off Wall’s head, arms and legs.

He compared his preparations for the act to the Battle of Trafalgar, and argued that “a dead body does not deserve any special respect”.

The details were included in a psychiatric assessment read out by the prosecutor, Jakob Buch-Jepsen, at the end of the 10th day of Madsen’s trial for sexually assaulting and murdering Wall.

The prosecution believes Madsen murdered Wall to fulfil his sadistic sexual fantasies, citing the more than 140 video clips or links to videos showing murder and torture found on his computers, hard drives and iPhone.

Madsen claims Wall died in an accident onboard his homemade submarine, when the pressure dropped in the submarine’s interior, flooding it with toxic exhaust fumes.

He admits, however, to dismembering her body, claiming it was the only way he could pull it from the vessel.

The psychiatrists have recommended that Madsen be held in “safe custody”, as his “narcissistic and psychopathic traits” make him a continuing danger to others.

Their report adds that Madsen showed “a severe lack of empathy and remorse”, and was “extremely untrustworthy” and a “pathological” liar.

In the assessments read out on Thursday, the psychiatrists draw attention to Madsen’s belief, expressed in their interviews with him, that it would not be any more painful for Wall’s family to receive her body in five separate pieces.

“He talks about the Holocaust Museum, where there is a teddy bear in a train carriage, which symbolises children being driven to the concentration camps,” the report reads.

“He breaks out in tears which stop as suddenly as they have arisen.”

All 36 witnesses in the trial have now been heard, leaving only the final summing-up speeches on 23 April.

A verdict is expected on 25 April.

The witnesses included four women whom Madsen had tried to get to join him for a submarine trip in the days leading up to Wall’s death, as well as four of his former sexual partners, former friends, colleagues and interns in his space rocket project.

His wife, one of the defence’s most important witnesses, presented a doctor’s note that excused her from questioning.

The court heard from Ditte Dyreborg, a veteran submariner in the Danish navy, who disputed Madsen’s claim that Wall was killed by toxic fumes. He argued that no traces of carbon monoxide, carbon dioxide or nitrogen oxide had been found in the submarine when it was tested.

The coroner said Wall’s lungs had shown no sign of heat damage or traces of exhaust gases, as would be expected if she had died from inhaling exhaust fumes.