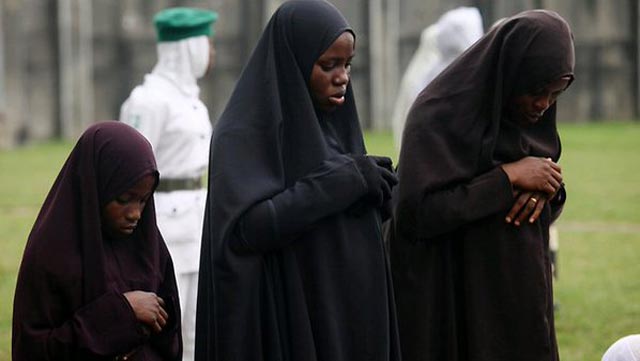 The Islamic women organisation in Al Muminaat, has said that telling a female Muslim to take off her hijab in the public is not only an insult to the Muslim but a war on the religion.

The leader of Al Muminaat, Hajia Nimatullah Abdulquadri disclosed this in her address to newsmen at a press conference in commemoration of the World Hijab Day in Jibowu, Lagos.

Abdulquadri decries the infringement of the right of female Muslims provided by the United Nations.

She, however, commended the House of Representatives for looking into the Firdaus Amasa issue,

She also encouraged Muslim women who are going through persecution because of their use of hijab to remain calm as justice is on the way.

Abdulquadri said: “It is really saddening to observe that, despite the clear provisions of Article 18 of the Universal Declaration of Human Rights which was proclaimed by the United Nations General Assembly which provides for the right to freedom of thought, conscience and religion, Muslim women are still being subjected to a lot of persecution, ridicule, oppression and injustice because of their religion.

“World Hijab Day is an annual event founded by Nazma Khan in 2013. This event takes place on February 1st each year in about 100 countries worldwide. It was born out of the challenges that the Muslim woman face such as discrimination and harassment, due to the observance of her faith. From the continuous denial of the right to wear hijab to school by girls; to the insistence of institutions that the ears of Hijabis be exposed during data capture; to Amasa Firdaus denial of being called to bar.

“It is commendable that the House of Representatives has decided to wade into the Firdaus Amasa issue, we must say that they should not only ensure she gets justice, but be compensated for the trauma she went through.

“Fidaus Amasa has actually made it abundantly clear that the Nigerian nation is not serious about the Girl-child education and giving equal opportunity to all citizens. It is telling us that education is not to get those who chose to be Muslims and express their being so.

“This isn’t a hidden agenda, but an open one for those who want to see, or else why would a Muslim lady in the Hijab who has gone through the rigours of the university, the Nigerian law school and has excelled in character and knowledge be denied her rights to be called to the Nigerian bar. Incidences of discriminations, denials, persecutions, profiling, harassments abound even in public institutions. Institutions powered by our taxes!

“These must stop forthwith. After all, in the Nigerian constitution as we have it today still recognizes and protect religions and religious practices and expressions. Hijab is a religious duty enjoined upon the Muslim woman by God.

“It is a religious duty and an obligation on every Muslim woman in the observance of her faith. And this right to believe and practice ones chosen faith is an inalienable right of every human being, is entrench in the constitution of the Federal Republic of Nigeria 1999( as amended) “Sec38.

“(1) Every person shall be entitled to freedom of thought, conscience and religion, including freedom to change his religion or belief, and freedom (either alone or in community with others, and in public or in private) to manifest and propagate his religion or belief in worship, teaching, practice and observance.

“To wear the Hijab by the Muslim woman is the practical application of these constitutional provisions. A sure way to call to anarchy is to jettison the provisions of the law. Our 2018 theme is My Hijab, My Right.”