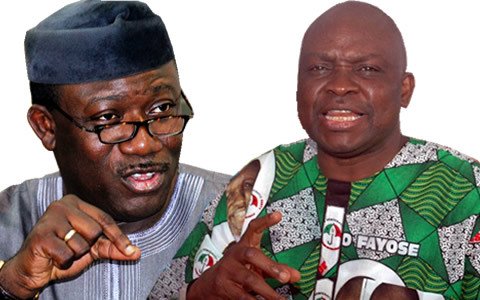 Ekiti State Governor, Ayodele Fayose, has raised the alarm that his predecessor, Dr. Kayode Fayemi, and the All Progressives Congress (APC) were frustrating his efforts to pay workers salary arrears.

The governor accused the Federal Government of stopping payment due to the state as refund on road projects.

Fayose stated this at a press conference in Ado Ekiti on Wednesday.

He said, “It is with heavy heart and deep sense of responsibility that I address you today on the latest display of deep seated hatred against Ekiti State and its people by leadership of the All Progressives, especially the Minister of Mines and Steel Development, Dr. Kayode Fayemi.

“When I said that I won’t leave office as a debtor of salary, I was sure that the over N12bn owed the state by the federal government on construction and rehabilitation of federal roads will be paid this month.

“However, I’m shocked that in their usual characteristics of working against every effort to alleviate the sufferings of the people, Dr. Fayemi through his Commissioner for Finance, Dapi Kolawole, went to court in Abeokuta seeking an order that the N11bn refund should not be paid to my administration.

“Because of this court action, the refund that should have been made this month is said to have been stopped.”

According to him, the latest onslaught was aimed at destabilising the state government ahead of the July governorship election.

“My question is: must Ekiti people, especially the workers be made to suffer just because of the forthcoming governorship election? Is it by inhuman act that these APC people intend to realise their tall dream of taking over Ekiti state by force?

“I consider this as wickedness taken too far against one’s own people all in the name of election.

“It is my belief that irrespective of our political affiliation, the wellbeing. And interest of our people should come first.

Fayose said it was worrisome that it was the same APC government of Fayemi that ran the state into huge debts, which led to the irregular payment of workers salary.

With the recent effort to stop the payment, the governor said the APC had exposed itself that it lied when claiming that refund had been made to his government in the past.

“Today the story has changed. The same money they claimed was paid in the past must now be stopped.

“This action is not against me but the good people of Ekiti.

“One wonders why a case affecting Ekiti was filed in Abeokuta. If nit for forum shopping. So that the federal government can hide under the matter in court.

“We want the federal government to realise that it is its primary duty to make life easy for the people.”