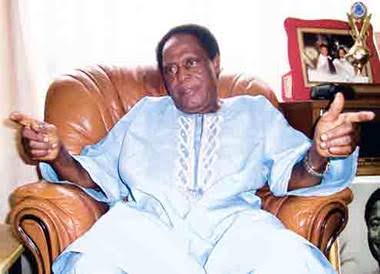 A former Minister of Foreign Affairs, Ambassador Mathew Mbu had narrated how former Rivers State Governor, Dr. Peter Odili, was betrayed by party hierarchy in the race for the Peoples Democratic Party, PDP presidential ticket in 2006.

He also revealed how Goodluck Jonathan was obsessed with myopic agenda based on Ijaw propaganda despite the fact that people like him (Mbu), late Dora Akunyili and others championed for a South-South presidency that brought the former President in power.

He said both Jonathan and his predecessor, late Umaru Yar’Adua were not prepared to lead Nigeria.

These revelations were made public through an autobiography the late ex-Minister left behind to be published by his family.

The book entitled “Dignity in Service,” is due for public presentation on Tuesday next week at the Yar’Adua International Conference Centre, Abuja

He said, “I deliberately wanted to stay away from the administration of Goodluck Jonathan. In the game of politics, you only engage in exclusion when you fail to fight for your rights. Jonathan was excluding himself and his presidency was heading for a precipice.

“He needed to reorganise himself and strategise. Politics is not a charity, if you fight for what is your right, and you cannot protect it, it will be taken from you. The South-South got recognition when I championed the South-South People Assembly.

“We campaigned for the presidency. It was clear to everyone that Dr. Peter Odili from the South-South zone was ready to provide leadership.

“However, the PDP primary of 2006 was a fiasco of internal democracy. Jonathan was made the running mate to Umaru Musa Yar’Adua in that convention.

“Dr. Peter Odili, our prepared and preferred candidate, was betrayed by the party hierarchy. Personally, I was sick because of the antics of a mischievous individual who had hoped that things would degenerate to a level that would lead to crisis and a declaration of a state of emergency.

“We are all mortals; President Umaru Musa Yar’Adua could not accomplish much, not just because he was sick, but also because he was not prepared for the demanding office of president. That was equally true of Jonathan as vice president.

“When Yar’Adua eventually passed the way of all mortals and an unprepared Jonathan became president, Jonathan suddenly forgot that he was the president of Nigeria and became obsessed with the Ijaw nation propaganda with a selected few. That was not the idea of the South-South presidency I championed.

“It does not mean a narrow agenda, rather a national service from this once forgotten zone. The obsession of Jonathan with certain characters kept me away from the presidency.

“A Yoruba man, Olusegun Obasanjo influenced his nomination as vice president, Dora Akunyili, an Igbo woman, intervened in the federal executive council for the transfer of power to Jonathan.

Pastor Tunde Bakare of Save Nigeria Group, made the Senate, headed by someone from the Middle Belt, to initiate the doctrine of necessity. So, why the obsession with a myopic agenda based on Ijaw propaganda?

“My distance from Jonathan was not complete incommunicado. I did advise him to properly articulate his agenda and reduce the bogus listed items to three: (1) free and fair election (2) security and (3) reduce the quantum of corruption that is visible within the corridors of power.

“If these are achieved, Nigerians in their ingenuity will fashion out the rest in no time. I proposed this to him because these are intrinsically democratic dividends. No other system of government can deliver them thoroughly with checks and balances.”