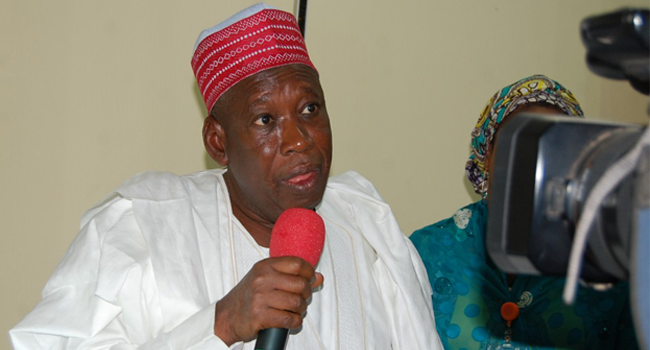 Kano State governor, Abdullahi Ganduje, has explained why he joined other members of the ruling party to thwart the bid by the National Chairman of the All Progressives Congress (APC), Chief John Odigie-Oyegun and other party leaders to elongate their tenure.

The governor told newsmen in Abuja yesterday, that they were against the tenure elongation idea because it would affect the fortunes of the party and portray it as undemocratic.

He said that the few APC governors who were clamouring for tenure elongation, which he labeled as “illegal”, had been convinced and now see reasons it should not be allowed.

“Yes, there was controversy on this, even though we were able to lay it to rest yesterday,” he said.

“But let me tell you the issues involved: those who are advocating for tenure elongation are advocating on the premise that when we hold congresses and convention, according to their own perception, there will be a lot of problems and that problem will linger into election period.

“Well, that is a perception. It could be that way, and it could be that some people wanted to retain power. Therefore, that reason is biased. However, I don’t belong to that school of thought.

“The constitution of our party has made a provision for four years, and at the end of it, we have to hold congresses and convention.

“The constitution of Nigeria has also provided for that, so we have no reason whatsoever.

“If you are saying that there would be some problems, problems are part of ingredients of politics. There is no way you can practice democracy in a developing country without having some problems.

“There must be problems. There must be divergent views and disagreements. There will never be a time that things will be 100 per cent normal. So even if there is a problem, that is part of democracy, and we will be able to move forward.

“So, for those who thought they would be able to continue, we said no, and I think Mr. President finally hit the nail on the head by saying that he is not in favour of any tenure elongation.

“Tenure elongation is undemocratic. It may lead us to litigation, which will not be good for the party.

“We are happy that we have convinced the few governors who were for elongation, and on Monday, we hope to have our NEC meeting where the previous decision will be reversed, and by then, the timetable will be out for congresses at the ward level, congress at local government level, congress at the state level and finally convention at the national level.