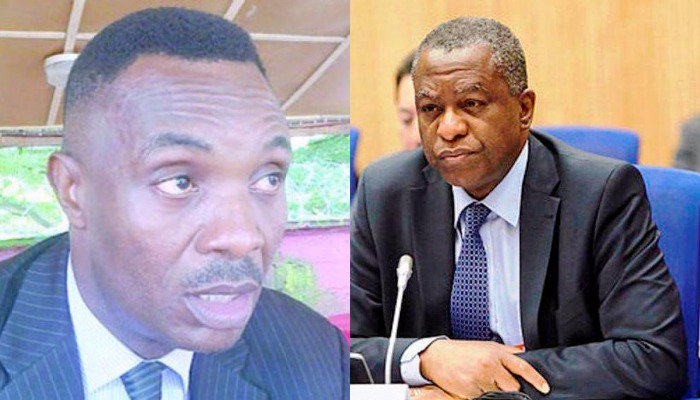 A chieftain of the All Progressives Congress (APC), in Enugu State chapter, Comrade Adolphus Ude has risen in defence of foreign affairs minister, Mr. Geoffrey Onyeama over the recent invitation of the party’s chairman in the State, Barr. Ben Nwoye by the Economic and Financial Crimes Commission, EFCC.

Ben, DAILY POST recalls, was quizzed by the commission at its Enugu office on Thursday over alleged misappropriation of N20.4m belonging to the party.

He, however, told journalists thereafter that his invitation was orchestrated by Onyeama and the special assistant to President Muhammadu Buhari on justice reform, Mrs. Juliet Ibekaku.

But Ude, a the pioneer deputy chairman of the APC in Enugu, said in a reaction that the chairman should defend himself and not apportion blames.

He said “the petition on which strength Nwoye was invited by the EFCC was written and signed by some committed women of the party in the state who operate under the aegis of ‘Forum of APC women leaders, Enugu state chapter, through their lawyer based on their claims that Nwoye failed to purchase vehicles for both the Women and Youth wings of the party, a directive given by the National secretariat of the party since 2015, upon which a total sum of twenty million and four hundred thousand (N20.4M) was released by the National secretariat of the APC, to that effect.”

Ude alleged that Nwoye instead of detailing the EFCC on how he went about with the party funds decided to brandish all forms of lies before the public, whipping up sentiments to score cheap political propaganda by mentioning foreign affairs minister,Mr Onyeama and Mrs Ibekaku.

His words, “I am telling you from grape vine sources that neither Mr Geoffrey Onyeama nor Mrs Juliet Ibekaku has a hand in the present case that has landed Mr Nwoye at EFCC. He has handled the affairs of the party as a dictator, believing he will succeed in sending every other official away for his selfish interest. Let him face the music. It is no longer a matter of whipping up sentiments”.

Nwoye, it could be recalled had stated that, “I was invited by the EFCC, but what struck me was that the invitation came from Benin, with a forwarding letter that I should report to Benin; it was in December.

“Upon investigation, I came to find out that it was a falsehood orchestrated by Juliet Ibekaku, working in consonance with the minister for foreign affairs, in an attempt to remove me from an office I was elected.

“Juliet, who was once a director in the EFCC used her connection and contact and illegally corrupted certain individuals and having them invited me to Benin, but thanks to God that we have honest people within the EFCC, and so, that petition was transferred, but the intent was to detain me in Benin in an effort to blackmail me, tarnish my name, in retaliation for my call for the removal of the minister. So, it was orchestrated as a retaliatory act against my person, but due to the honestly of men and women in the EFCC, they transferred it to Enugu.

“On reaching to Enugu, they used the name of two individuals, they had a lawyer, quack lawyer, who put together a two-page petition, with the name of the petitioner, one Ngozi Okoli, unknown to the party, and another Rose Ogbonna, also unknown to the party, as President and secretary, respectively of what they tagged Enugu State APC women leaders’ forum. There is no such forum; our constitution does not recognize such body known as women leaders’ forum.

“So, Mrs. Ibekaku used those two and alleged that I was given money to purchase vehicles for women leaders, vehicles for youths, vehicles for state secretary and I embezzled the money. They claimed that the money came from the national secretariat and that it was N20.4m, and it was given to me with directives to do that.

“Of course, no such thing took place, but because I believe in the system, we believe that the system we put together will have to work for us. Those who sponsored it, those who orchestrated it will someday come to answer. The men and women in the EFCC have looked at it, I have answered the questions, we will continue it from there”.