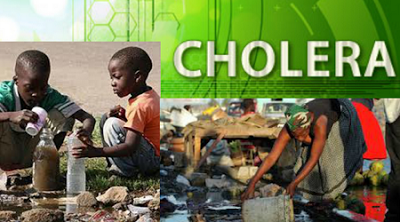 A cholera outbreak in Gashua, Yobe State, has claimed 13 lives out of 160 cases reported in the last six days.

A source at the Gashua General Hospital told NAN that five deaths were first recorded, while eight lives were later lost to the disease.

The source said victims were brought in from Sabon Gari, Katuzu, Zango, Lawan Musa and Sarkin Hausawa, which were among the areas worst affected by the outbreak.

Meanwhile, the State Government has dispatched a Rapid Response Team to contain the outbreak and spread of the disease.

The General Manager, Yobe Rural Water Supply and Sanitation Agency, Mohammed Bukar, confirmed that the response team has embarked on chlorinating water reservoirs and disinfecting toilet facilities in the area.

He said aqua tablets were also distributed to households, while promotion of personal hygiene has been intensified to curtail spread of the disease.

Bukar attributed the cholera outbreak to poor hygiene, adding, “We collected water samples from various sources, and using the bacteriological test kit, we discovered some private boreholes were contaminated.”

He said shallow boreholes managed by private individuals were prone to contamination.

“There is the need to pass the water law in good time to check the excesses of some private borehole owners who abuse due process and put the lives of people at risk,” the general manager said.

Bukar said water samples from five boreholes in Gashua, which tested positive, have been shut down; while more samples have been taken for advance laboratory analysis.

He said communities in neighbouring Karasuwa and Yusufari local government areas have been disinfected and provided with aqua tablets to check possible spread.

Similarly, the Senate Leader, Dr Ahmad Lawan, has provided fluids and drugs to the Gashua general hospital for treatment of victims at the hospital.

Aide to the leader of the Senate, Habu Kaku, told NAN that the donation of the drugs and fluids was to complement government efforts in the treatment of the victims.

“This is a first phase intervention to arrest the unexpected outbreak and to compliment the efforts of the state government in curtailing the menace,” Kaku said.