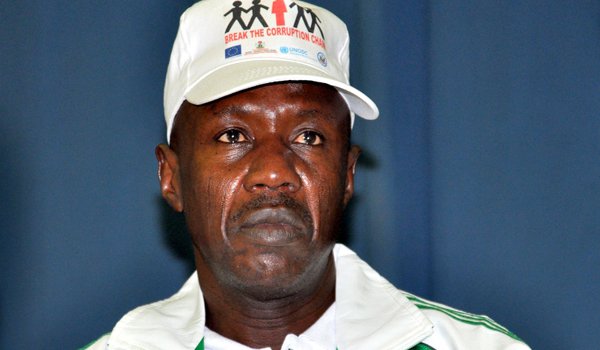 President Muhammadu Buhari-led government has issued a query to the Acting Chairman of the Economic and Financial Crimes Commission (EFCC), Ibrahim Magu over the corruption charges filed against the Chairman of the Code of Conduct Tribunal (CCT), Danladi Yakubu Umar.

PRNigeria obtained a copy of the query to Magu and another letter written to a Senior Advocate of Nigeria, Festus Keyamo.

In the query dated February 16, 2018 and with Reference No DPP/ADV:368/15, Magu was ordered to make his response to the query available to the Attorney General of the Federation (AGF) and the Minister of Justice on or before Tuesday, February 20, 2018.

Signed by Mr. Dayo Apata, the Solicitor General of the Federation and Permanent Secretary, Magu was asked to explain what informed the filing of corruption charges against the tribunal chairman having being cleared of corruption allegation two times by the commission.

Titled, “FR VS Danladi Umar (CR/109/18) request for Briefing,” the query read in part: “The attention of the Honourable Attorney General of the Federation was drawn to news report that the Economic and Financial Crimes Commission has filed charges of corruption against the Chairman of the Code of Conduct Tribunal, Hon. Justice Danladi Umar, before the FCT High Court.

“I am directed by the Honourable Attorney General of the Federation to seek clarification from you as to whether the charges were filed on your instruction or directive and if in the affirmative, what is the compelling basis for doing so. This clarification becomes imperative in view of the following background facts.

“The Commission’s investigation report dated 5th March 2015 addressed to the Secretary to the Government of the Federation stated as follows: “The facts as they are now against Justice Umar raised a mere suspicion and will therefore not be sufficient to successfully prosecute for the defence.

“The Commission’s position in paragraph 2(a) above was also maintained and sustained by the Honourable Attorney General of the Federation while appearing before the House of Representatives’ Investigative Committee sometimes in 2015 to the effect that report of investigations showed that the allegations against Hon. Justice Danladi Umar were based on mere suspicions.

“In view of the foregoing, the Honourable Attorney General of the Federation requests for your prompt briefing as to the existence of new facts which are contrary to the position in your attached investigation report, sufficient evidence or other developments upon which the prosecution of Hon. Justice Danladi can be successfully based.

“Kindly accord this letter top priority while your prompt response within 48 hours from the receipt of same is required in the circumstances.”

In the same vein, Keyamo was requested by the AGF to confirm who authorise him to file the corruption charge against Umar.

Like Magu, the SAN was given till Tuesday February 20, 2018 to furnish the Office of the AGF in writing detail of who engaged or issued him with authority to file the corruption charges.

The letter to Keyamo with reference No DPP/ADV:369/15 dated February 16, 2018, which was also signed by the Solicitor General of the Federation and Permanent Sectary read in part:

“The attention of the Honourable Attorney General of the Federation was drawn to news report that you have filed charges of corruption against the Chairman of the Code of Conduct Tribunal, Hon. Justice Danladi Umar, before the FCT High Court.

“The Honourable Attorney General of the Federation hereby requests that you kindly furnish this office with the details of the instruction or authorization upon which you instituted the case under reference. Kindly accord this letter top priority while your prompt response on or before Tuesday, February 20, 2018 is solicited in this regard.”

Although the EFCC in two separate letters to the Federal Government through the Secretary to the Government of the Federation had in 2015 and 2016 cleared Umar of any wrongdoing in the alleged N10 million bribery allegation made against him by a defendant, Rasheed Taiwo Owolabi standing trial before him on false asset declaration.

Upon receipt of the petition from Owolaabi, the EFCC had investigated the petition and sent its report to the Secretary to the Government of the Federation (SGF) with a Reference No EFCC/EC/SGF/03/56 dated March 5, 2015, personally signed by the then Executive Chairman of the EFCC, Mr. Ibrahim Lamorde exonerating the CCT boss from the bribery saga.

The EFCC report received by the office of SGF on March 6, 2015 was categorical that “the facts as they are against Justice Umar raised a mere suspicion and will therefore not be sufficient to successfully prosecute for the offence.”

Other EFCC documents show that in 2016 a fresh investigation was conducted into the same N10million bribery allegation and the same anti-graft agency in its second report absolved Umar of any wrongdoing and that the bribery allegation against him remain a mere suspicion.

The EFCC second report with reference EFCC/P/HRU/688/V30/99 dated April 20, 2016 and submitted to the SGF and signed by the Secretary to the Commission, Emmanuel Adegboyega Aremo, read in part: “Kindly recall our correspondence of March 5 2015 with Reference EFCC/EC/SGF/03/56 with above subject caption. We will like to reiterate the Commission’s position in regard to this matter as earlier communicated to you and state that the allegation levelled against Justice Umar were merely suspicions and consequently insufficient to prosecute the offence.”