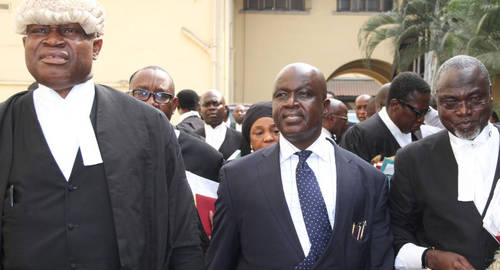 Justice Adedayo Akintoye of an Igbosere High Court in Lagos on Friday dismissed the no-case submission by a Senior Advocate of Nigeria, Rickey Tarfa.

The judge also refused to award the N520 million damages applied for by the defendant against the EFCC for “malicious prosecution”.

The News Agency of Nigeria (NAN) reports that the Economic and Financial Crimes Commission (EFCC) had charged Tarfa with a 26-count offence bordering on bribery and attempt to pervert the course of justice.

However, at the end of the prosecution’s case, Tarfa through his lawyer, Mr Jelili Owonikoko, made a no-case submission in bribery charge slammed on him by the EFCC.

He said they had reviewed the prosecution’s case and concluded that the defendant had no case to answer.

At the resumed hearing of the case on Friday, Justice Akintoye, while ruling on the application, said the prosecution had established the essential elements of the offences which the defendant was charged with.

“What is expected of this court at this stage of no-case submission is to look at the evidence adduced so far and determine whether a prima facie case has been disclosed against the defendant.

“At this stage also, the prosecution is not required to have established its case beyond reasonable doubt against the defendant as the guilt of the defendant is not in issue now.

“I have carefully evaluated the evidence so far with the totality of evidence adduced before this honourable court, it is my opinion that the prosecution has established the essential elements of the alleged offences with which the defendant is charged,” Akintoye said.

She said the court would require some explanations in respect of the charge preferred against the defendant.

“The evidence of the prosecution witnesses has not been discredited by the cross-examination of the defence counsel to the extent that no reasonable tribunal will simply convict based on it.

“I, therefore, hold that a prima facie case of failing and refusing to declare his assets, making false information to an officer of the EFCC and offering gratification to a public official as stated in the amended information filed before this court has been made against the defendant.

“Therefore, the defendant is called upon to enter his defence and the no-case submission filed on his behalf is hereby dismissed,” Akintoye ruled.

She added:“With regards to the defendant’s applicant claim for exemplary damages for malicious prosecution against the EFCC, I find no merit in this claim of N520 million damages and same is refused.”

Akintoye adjourned the case until March 13 for the defence to open its case.

NAN recalls that Tarfa had on Jan. 17, asked the court to award N520 million damages against the EFCC after a no-case submission.

He urged the court to see the 26-count charge brought against him by the EFCC as “malicious”.

He also wants the court to “make an example of the anti-graft agency and slam the hammer” on it with a N520 million damages.