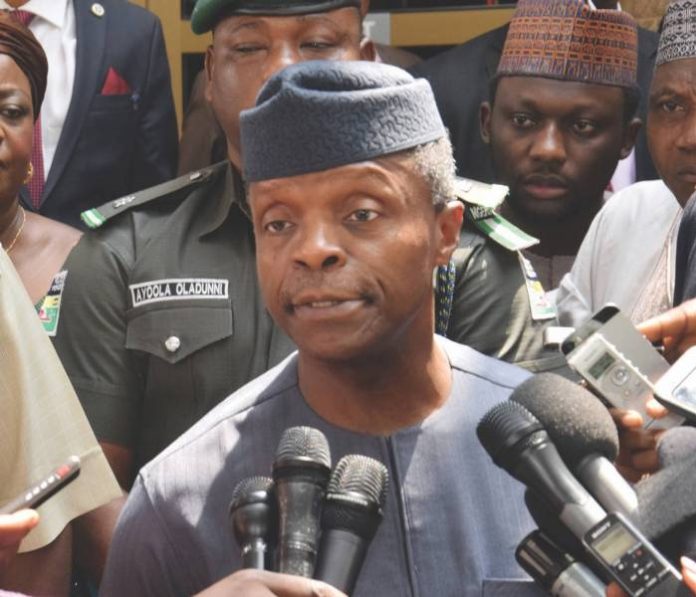 Vice President Yemi Osinbajo has disclosed that in the last decade, more than 20,000 lives have been lost to terrorism propagated by Boko Haram, and more than 2 million persons displaced.

Prof. Osinbajo stated this at the opening ceremony of the Inter-Governmental Action Group against Money Laundering in West Africa (GIABA) 18th Ministerial Committee meeting, which held at the Sheraton Hotels and Towers, Abuja, Nigeria.

He maintained that African economies must treat money laundering and other financial crimes with zero tolerance to maintain and sustain economic, financial and political stability.

He said money laundering and terrorist financing are crimes that have significant ramifications for the security and wellbeing of various countries.

He said “In Boko Haram we have seen the devastation that a well-resourced terrorist group can wreak, not just on individual lives and livelihoods, but also on the stability of national and regional political and economic systems.

“In the last decade, more than 20,000 lives have been lost to terrorism propagated by Boko Haram, and more than 2 million persons displaced. One important question that arises is this: How did a once-obscure sect, domiciled primarily in a single city in Northern Nigeria, evolve to become, at one point, a menace, not only to the country but to the entire Lake Chad Basin?

“I’m certain that a significant part of the answer to those questions will be found in the complicated multinational networks of financing that sustained the group and nurtured its hateful vision. There is absolutely no way that Boko Haram would have grown as dangerous as it did without access to funding and resources, mobilized from far and wide..”

He stressed that it is clear that without dealing a lethal blow to those powerful criminal networks that funnel money to terrorist groups, government cannot reasonably hope to completely obliterate the threat of terrorism and other organized criminal activity in the sub-region.

He further stated that Boko Haram is just one example of how much evil can be done by a subversive group that has figured out how to raise money in the shadows.

Osinbajo said, “There are many others like it, with similar or different goals, all of them united by the need to raise financing to achieve their aims. We know that the lines between terrorist groups, corrupt politicians, traffickers (whether of drugs, guns or people); fraudsters; smugglers; kidnappers; illegal oil bunkerers, etc, have always been blurry; that these groups have always found complementary need for one another’s tactics and strategies.

“Indeed, if there’s one thing that the world’s deadliest terrorist groups, from Al Qaeda to ISIS to Al-Shabaab, have in common, it is the ease and expertise with which they diversify their criminal activity while retaining their overarching goal of inflicting maximum devastation.

He contended in the age of the Internet, that blurring has intensified. Cyberspace has made it easier than ever for criminal syndicates to not only draw inspiration and learning from one another, but to also devise increasingly complex means of fundraising and of bypassing conventional financial system checkpoints and safeguards.

Osinbajo lamented that the advent of Bitcoin and other cryptocurrencies provides the unprecedented levels of discreetness preferred by criminal networks.

He pointed out that the result is that financial crime is able to always stay a few steps ahead of governments and the law.

According to him,” as for official corruption, all around us we see its devastating effects – in the rundown schools and hospitals; potholed roads; under-equipped armies; subverted financial systems, and fragile democracies.

“At risk from money laundering especially the laundering of proceeds of corruption, and terrorist financing are the stability of our financial and political systems, and ultimately the development of our countries and the prosperity of our people. What this means is that we are dealing here with an existential threat – it’s either we wipe it out or it wipes us out.

“This should spur us to treat money laundering and other financial crimes with zero tolerance. We have for long enough affirmed our commitment as a sub-region to fighting Money Laundering and Terrorist Financing. We must now back this intent with forceful action and visible results.

While acknowledging the steps governments have taken, individually and collectively, in recent years – implementing recommendations, strengthening institutions, building partnerships and collaborations, Osinbajo warned that they cannot afford complacency at this time.

He added, “This is actually the reason why we need to redouble our efforts, to shore up the political will required to apply and implement the laws and frameworks we have worked hard to develop.

“Information sharing is very important to the success of our fight. This means that on the one hand we should rise above the temptations of secretiveness and mutual suspicion; and on the other hand we must do everything in our power to sustain trust and confidence by safeguarding every piece of information that is being shared across national databases.”

“We must also strive to work beyond the barriers imposed by the differences in our various legal systems, bearing in our minds that the criminals we are tackling have never allowed themselves to be held back by these obstacles. I trust that these issues and more will be exhaustively covered in your deliberations at this meeting.

He drew the attention of the participants to the difficulty Nigeria is experiencing in repatriating proceeds of corruption from financial institutions of the more developed nations.

The vice president lamented that despite numerous mutual legal assistance treaties and Conventions, it is obvious that the government are not making the sort of progress they expect to see.

“It is unconscionable, in our view, to have stolen funds in a bank within the jurisdiction of an FATF country and to have to go through a rigorous obstacle course to retrieve the funds and even when such funds are to be returned after several years, humiliating conditions are attached.

“It is the view of Nigeria that FATF countries must, as a matter of respect for the spirit of our collaboration, and with the same efficiency and zero tolerance for quibbling, ensure the smooth repatriation of proceeds of corruption to the economies from where they were stolen

He said the other issue is the risk of the dangers posed by anonymous corporate ownership noting that If nothing else, the Panama Papers and now the Paradise papers clearly illustrate the global scale and spread of this problem.

“So this is a global challenge and nothing less than a truly global approach will be needed to tackle it,” he added.

Osinbajo commended the United Kingdom, Norway, Netherlands and Denmark for leading the way in establishing public registers of the real, human owners of companies in their countries.

He called on other G8 and G20 countries not only to follow suit but also to initiate actions to end corporate secrecy in some of their dependencies.

“We cannot have anonymous ownership of companies, trusts and other arrangements designed to cover ownership of assets, and at the same time expect optimal results from anti-money laundering measures,” he stated.