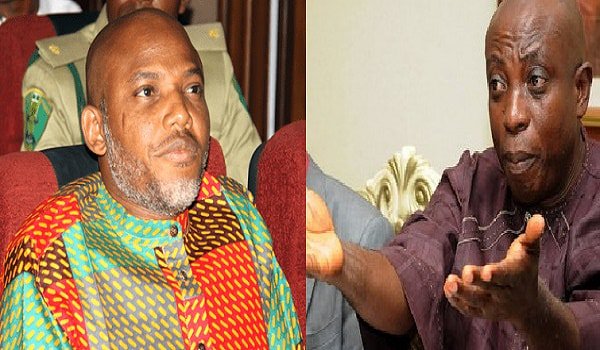 Ralph Uwazuruike, founder of the Movement for the Actualisation of the Sovereign State of Biafra, MASSOB, has described the leader of the Indigenous People of Biafra, IPOB, Nnamdi Kanu and Igbo people as “backbiter and blackmailers.”

Uwazuruike made the remark while reiterating his earlier claim that Kanu took over Radio Biafra from him in London.

Speaking with Punch, the pro-Biafra agitator stressed that people of the South East are good at “double-crossing” their own.

He said, “I formed MASSOB. As a matter of fact, I am the originator of the new Biafran struggle. I originated it in 1999 and no other group spoke of Biafra before 1999. I also said it that we would allow the formation of other groups. I studied Political Science and Law and I have read many issues on struggles and revolutions and concluded that there was no way one body (a group) could achieve Biafra without other factions.

“I went to London and floated Radio Biafra there. I needed somebody to operate it and I appointed Nnamdi Kanu as the director but he felt that the best thing he could do was to blackmail me with the radio.

“Yes, with my own radio station! It is not new because that is the nature of an Igbo man. It is for the Igbo man to backbite, to double-cross his brother; and that is why we are behind the Nigerian scheme. As long as the Igbo man continues with that mentality, the Igbo race is doomed. Look at what is happening in the political parties.”