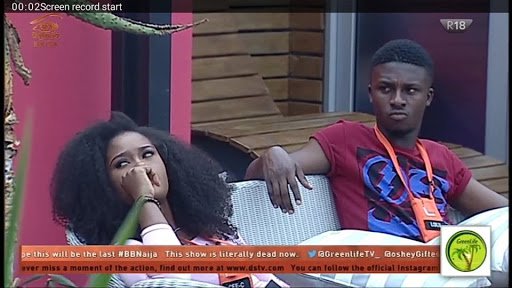 Viewers of the Big Brother Naija have faulted the organizers of the show for giving housmate Cee-c same warning strike as Lolu.

Cee-C and Lolu were yesterday issued a two-strike for breaking the house rules.

The duo broke the rules after Cee-c removed the chain tied to her partner and interacted with other housemates. She also inflicted injury on Lolu in the process.

This decision by Big Brother has stirred reactions as some Nigerians on social media described the strike received by Lolu as unfair and bias.

Others however, said it is the rule of the game and Lolu ought to have done better.

Here are some comments…

”Murungi: You pple are very corrupt. Doing everything to protect Tobi coz he works with the sponsors. First u nullified the nominations and now youre pairing cee c with lolu coz u know pple want her out and u dont want to lose Tobi. Shame.

Seriki Islamiyat: It’s not as if the pairing is starting now. Big brother cleared it that if they both survive eviction this weekend, so how are they bias?

Amara Olebunne: I am beginning to see sense in what people re saying, cebi can’t survive eviction cos of ceece cos alot of people aren’t voting for tobi cos of her. So to protect tobi, they had to pair him with someone else.

Florence : The pairing will be effective next week after eviction if at all both pairs survive.meaning that if cebi hv the lowest votes, both cee c and tobi will b evicted. No one is protecting anyone abeg.

Luchigreat: I were lolu,I will tell biggie to dismiss me form the bbn# cause am obviously not winning that money with ccee as my partner,now that I still have my balls..then getting evicted together after what she did me,yeaay we both have faults but abgie I cannot come and lose my manhood.

Big bright: Since a partner’s offense affects the other partner, then the strike should have been… For Loto and Ceebi. Not Lolu and Cee c. If so, K Brule should have been striked alone. Pairing Lolu to Cee c from Monday is unnecessary.

Lucy Omoarukhe : I am done with big brother and bias. I would probably have slapped her as reflex action. I just had a feeling that they were going to pull such a stunt. This show is in no way going to better cee c’s life. They just made her think that her actions are always right.

Flo Rabiu :Terrible judgement biggie considering you are also aware of Cee C’s domineering attitude. Lolu should have gotten 1 strike and not 2, not everyone can condone the rubbish Tobi has been accommodating.

Ralph : Even if one can condone it. Lolu had tried. One day of rubbish is endurance. another day is stupidity. Lolu was not violent. He was injured to top it all and biggie still gave him equal strikes as ceecees. That not fair.

Ritzylicious : He always flavours Cee c in every situation. To the detriment of others , So freaking annoying..I think I’ll soon stop watching BBN..

Osifowura Nikki :They both deserved the punishment cos they were both at fault,i don’t need to take sides cos of hatred for Cee-c.

Sade : Omg can anyone hear CeeC???? There is poor Lolu talking about taking responsibility and she is blaming him saying He was intentional! Really @BBNaija??? 2strikes is all she gets???? Lord have mercy.

Gracelove :Before you all yap, the game was all about tolerance, as much as Cecee is wrong Lolu pushed her to the wall. Why didn’t Lolu allow her to seat??? Let’s be logical in our arguments and stop being rigid in our thoughts.

Odunayo: Except for the part Wia biggie said they ll be a pair on Monday if they survive the eviction.. biggie make we let you know now, kolewerk.. The bondage is meant for Tobi only.. Nigeria abeg let ceeC start coming home.

Winnie Orafa : I feel Lolu should have been given just one strike. Cee- C deserved her own.”