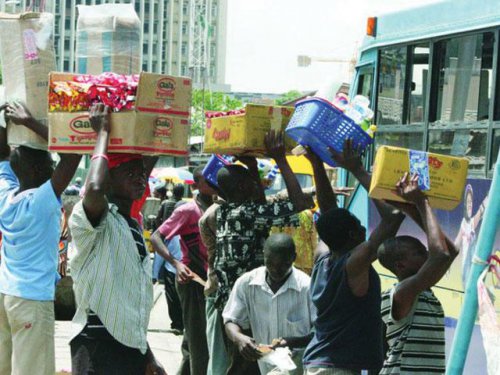 Anambra State government has made good its threat to arrest child hawkers who ply their trade during school hours.

Government had earlier handed out a strict warning, saying that it would not tolerate children who hawk wares during school hours, especially with its free education scheme which is designed to accommodate indigent children.

Commissioner for Social Welfare, Children and Women’s Affairs, Dr. Victoria Chikwelu who led the raid jointly carried out by the government and a non- governmental organization, said not less that 25 children were arrested.

Commissioner Chikwelu warned that Education was a development right of a child and not a privilege, while explaining that the raid showed that government was very serious about implementing the law to the letter to create a child- friendly environment.

She warned parents and guardians who are using their wards or children to make money by sending them to hawk during school hours to retrace their steps or risk prosecution.

On his part, the Chief Executive Officer of one of the partnering organization, Sir Emeka Ejide, stated that the raid on out-of-school child hawkers and those being used for alms begging was a continuous process that will spread to all parts of the state in line with Governor Obiano’s resolve in making 2018 the year of the Anambra child.

He noted that the raid took them to Oye Agu Abagana and Eke Awka markets, explaining that between ten o’clock in the morning and three o’clock in the afternoon, the Ministry captured twenty-five children at different points.

They explained that they would love to go to school but because their parents were poor and could not afford their school fees, they sent them to hawk to make ends meet.

Others confirmed that they were physically abused, and molested, among other risks, when they hawk sachet waters and other items.