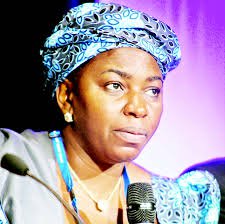 A Federal High Court sitting in Jos on Tuesday ordered the former Minister of Water Resources, Mrs. Sarah Reng Ochekpe and two others to submit their recent passports and international passports as part of their bail conditions.

In a suit FHC/J/141C/2017, Ochekpe and former Acting Chairman of the Peoples Democratic Party (PDP) in Plateau state, Raymond Dabo and the state campaign coordinator of Goodluck Jonathan campaign organization, Leo-Sunday Jitong were arraigned by the Economic and Financial Crimes Commission (EFCC) before the Jos Federal High Court on a two-count charge of money laundering and conspiracy amounting to the sum of N450 million.

It would be recalled that during the last sitting, the presiding judge, Musa Kurya granted the three accused persons bail based on self-recognition following their formal application.

However, during today’s hearing, the EFCC through its prosecuting Counsel, Ahmad Yakubu Muntaka amended the charges from two to three-count charge.

Aside from the two count charge of money laundering and conspiracy, EFFC added another charge by alleging that the accused persons sometimes in March, 2015 in Jos, Plateau State did retain the proceeds of crime to the tune of N450 million from one Annet Olije Gyen, Head of Operations Jos Branch of Fidelity Bank.

EFCC’s Counsel Muntaka alleged that the sum exceeded the amount authorized by the law and thereby committed an offence contrary to the provision of section 18 (a), Section 16 (1), (d) of the money laundering (prohibition) Act 2012 (as amended) and punishable under section 16 (2), (b).

The three accused persons through their Counsel Sunday Oyawole pleaded not guilty and requested for the court to grant them bail.

The presiding judge, Musa Kurya ordered the accused persons to deposit their recent passports and international passports before adjourning the case to Wednesday (14th February, 2018) for hearing.