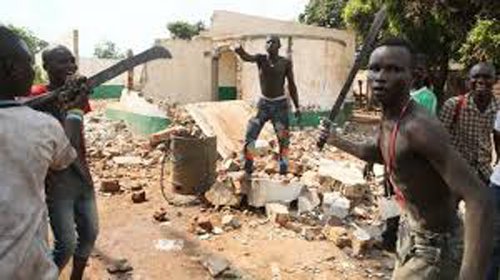 The sectarian violence that has bedeviled Plateau State in over a
decade has put the state in the headlines on both local and
international media for all the
wrong reasons.

The widely acclaimed “Home of Peace and Tourism”, had its peace
punctured by series of ethno-religious unrest, wanton destruction of
lives and property held sway as these ugly incidences lasted.

Houses and worship places were torched and razed down to the ground.
Innocent people were hounded, hacked to death or maimed on account of
belonging to a particular faith.

The antics and tactics always employed by the arsonists’,
rioters and mercenaries during the Jos crisis had suggested that the
skirmishes have some religious undertone.

Charred corpses, several human parts, razed buildings and a frightened
populace running from one end of the city to the other characterized
the irony of the peaceful nature of Jos.

Ever since the eruption of violence in the city, the Federal, State,
and other relevant security agencies had put in untiring efforts to
ensure that peace and the spirit of brotherliness that was once the
hallmark of the State was restored.

Religious bodies, civil society groups, as well as public spirited
personalities have been actively involved in bringing back the lost
glory of the State.

The Dyemburuk [Dogo- Nahauwa] killing of hundreds of women and
children was attributed to the lackadaisical attitude of the security
operatives who were said to have been informed handy before the attack
was orchestrated, the then Governor of the State, Jonah Jang, as well
as other illustrious sons of the State accused the then GOC of the 3
Armored Division of the Nigeria Army, Rukuba, Major General Saleh
Maina, of unprofessionalism and crass disregard to the military
ethics.

The criticisms and calls by different groups led to the redeployment
of the soldiers on ground then.

The 2010 unrest led to the establishment of the Special Task Force
(STF) code named “Operation Safe Haven”, the Task Force which
comprises of Army, Air force, Navy, Police and Civil Defence, is
saddled with responsibility of restoring peace in the State.

Although the STF was able to stem the tide of the violence in the
State capital Jos, that resulted in the return to normalcy and
improved business activities.

After peace was restored in Jos City, the hinterlands started
witnessing attacks by unknown gunmen, the gunmen often carry out their
attack at night and they do it in military fashion. The gunmen will
begin by shooting sporadically to scare people and forced them out of
their houses.

In most cases they began by setting homes ablaze to force the
occupants out of the room. As you run out of the fire you run into the
hands of the attackers and you are gunned down.

However, the emergence of Barrister Simon Lalong of the APC as the
Governor of Plateau State, in the April 11th, 2015, gubernatorial
election did not come to many people in the state as a surprise,
because he enjoyed immense goodwill from the then ruling PDP in the
state, despite being from an opposition party.

This came through the combined efforts of traditional PDP voters and
the contribution of majority of Plateau PDP elders, who worked against
their party to give APC victory, because the immediate past governor
of the state, Senator Jonah Jang, fielded a candidate from his own
ethnic group.

Thus, while the people were still basking in the euphoria of his
victory, Lalong knew he had settled down to map out strategies that
would take the state out of the woods.

During the campaigns, Lalong promised to tackle insecurity to a
standstill among other promises.

He was also trusted to reconcile the warring factions and build the
broken bridge of peace among the various groups in the state. And to
his credit, the general feeling in the state in the first two years of his
administration, is that it has lived above board in ensuring peace is
restored to hitherto crisis ridden communities in the State.

In his five-point policy thrust, Peace, Security and Good Governance;
stands as the top most as without peace no meaningful development can
be achieved.

Successive governments had tried to resolve the multi-dimensional
crises with very little success. But Lalong, in a development that
appeared rather magical in his first two years in office, begun to
restore peace to the state.

The Governor had said in a chat with journalists sometime in 2016,
express optimism that peace must be restored to the restive parts of
the state, particularly Barkin Ladi and Riyom Local Government Areas
that had turned to war zones for Fulani and Berom.

“On many occasions, we have had to sit with both the Fulani and the
Berom, and suggestions were made, and now we are finding solutions to
the crises.

“I have had to go to the president up to five times over the security
situation in Plateau. If the situation does not improve, we would
plead with him to treat us like the North-east. But I am optimistic
that with the effort we are putting in place, the situation will
improve very soon”.

It would be recalled that on February 1st, 2016, the governor signed
into law a bill establishing a Peace Building Agency in the state.

During the signing into law of the bill, he said, “Our Government has
repeatedly assured the people of Plateau State that we will not rest
on our oars in ensuring that we address squarely the challenges of
security and peace building that we are facing, as well as doing the
needful, in ensuring that we provide the enabling environment for the
economic emancipation of our people.

“As a tripartite action that will drive good governance, therefore, we
are today taking the second concrete step in consolidating on the
Peace Building effort we have made in the Past 8 months with the
enactment of the Law Establishing the Peace Building Agency”, he
assured.

Sadly, barely four months after the Lalong led administration
celebrated its two years anniversary in office and enjoyment of
relative peace, the killings resumed, with scores murdered in Miango
district of Bassa, Riyom, Bokkos and Barkin Ladi LGAs of the State.

September 7, 2017, mark the resumption of hostilities among the Irigwe
and Fulani, where 29 persons were killed by suspected Fulani herdsmen.

Miango community has known no peace since September when the corpse of
a Fulani boy was found which resulted in reprisals by the herdsmen in
several communities within the district.

The latest attacks occurred in Jebu Bassa and Huke all in Miango
district, amongst the victims were 100, 90 and 70 years olds, while
several houses and properties were completely destroyed.

However in a recent interview with journalists, after a meeting
President Muhammadu Buhari, even though he said he was misconstrued in
most of the statements, Governor Lalong was asked what’s the secret to
the relative peace being enjoyed in Plateau state, he said, “I have
said it a number of time it is a matter of accommodating interests,
you take everybody as your own.

“Most of the lingering crisis were between farmers and herdsmen in
Plateau, but today in most parts of the state you will see beautiful
relationship between herdsmen and farmers”, he stressed.

“At the end of last year something small happened but I’m not saying
it was between herdsmen and farmers, it was as a result of criminal
activities and so we focused on fishing out those criminals.

“Let me also say that plateau was one of those that embraced ranching.
I had a lot of opposition initially when I said Plateau was keying
into ranching. Some states said they don’t have land but I said
whether I have land or not we have to provide land for ranching
because that I see as solution to the conflicts”, he stressed.

“Secondly, I can’t implement anti-grazing law. There are levels of
implementation which will require government intervention, provision
of ranchers and thirdly, when you are talking of ranching it is a
component of agriculture business you will also require subsidy.
Subsidy must come from federal and state governments and by the time
we develop it and put every structure on ground, then we can bring
laws to regulate the implementation. So I don’t want to jump one step
before the other.

When he was asked whether he advised his colleagues about implementing
the anti-grazing law, Lalong said, “To be honest with you I did. I
told the Governor of Benue he was doing the law, I said look, why
don’t you tread softly, just be careful, take other steps before you
start implementation.

“But you see states are different, his own concepts are different and
for us on the Plateau is different. I said I will not do the law
before implementation. I have not developed the ranching areas so I
cannot go and say I put a law, to stop who? If I stop the people what
is the alternative? He asked.

“So I said, do consultations allow the people to understand and buy
into the concepts”.

Meantime killings on the Plateau has continued especially in the
hinterlands, without the anti-grazing law being implemented, what
happens if the citizenry insists on having the law in the State?

It was perceived in some quotas that the implementation of the law in
Benue and Taraba States led series of attacks by suspected herdsmen,
which has claimed so many lives and properties.

The question on the lips of virtually every Plateau person is, when
will the killings stop?