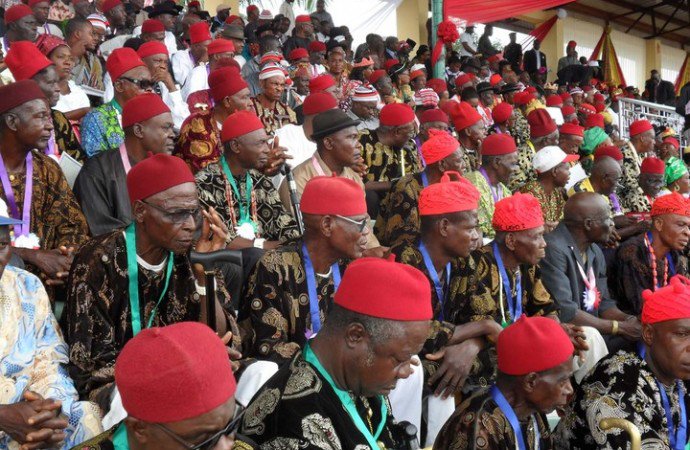 Ahead of the 2019 general elections, the Ohanaze Youth Council, OYC, has thrown its weight behind Governors Ifeanyi Ugwuanyi, Okezie Ikpeazu and David Umahi of Enugu, Abia, and Ebonyi respectively.

The group in a statement made available to DAILY POST on Monday, signed by Mazi Okechukwu isiguzoro, its National President, Worldwide, the OYC said apart from the fact that the governors had done well, they were favoured by existing zoning arrangements in their States.

It read in part: “Governor ikpeazu is from Abia South, and the Ukwa/Ngwa Axis of Abia state, based on Abia charter of Equity, which encourages rotation of governorship seat among the three senatorial zones, Abia North and central have done 16 years of 8 years each in Chief Orji Uzor Kalu and Senator T. A orji, and Governor ikpeazu is doing on 4 years by 2019.

“Ukwa/Ngwa which is producing Governor for the first time since 1914, Ohanaeze Youths will roll out its Abia structure for Governor Ikpeazu to complete his tenure in 2019.

“We will not stop every other aspirant from their constitutional rights to contest in 2019 but Ikpeazu like other South East Governors have been supporting Ohanaeze Ndigbo monthly and have done well in Areas of Youth empowerment, Made in Aba Products promotion, which have yielded enough dividends for Nigeria abroad. Ndi Abia should ensure Ikpeazu will remain as Governor beyond 2019. Governor Ikpeazu’s achievements and humility is unprecedented, and OYC will lead Ikpeazu to victory in 2019.”

On Governor Ifeanyi Ugwuanyi, the group said “this is the first time Nsukka people are at the saddle as Governor Enugu, and across the state, the development is unprecedented and Enugu is blessed, the Unity among the three tiers of government in Enugu is cordial, and Gburugburu as fondly called remains the number one choice for Ndi Enugu in 2019. Governor Ugwuanyi has empowered the youths and Ohanaeze youths will leave no stone unturned until Governor Ugwuanyi is re elected in 2019.

“His Urban facelift in terms of infrastructure, promotion of Local Abakiliki rice, harmonious relationship with federal Government, and beefing of security around the state through his neighborhood security watch.

“For the first time since the creation of Ebonyi state, this is the first time Ebonyi south is producing Governor, since other zones have done 16 years in Senator Sam Egwu and Chief Martin Elechi, His giant strides in Ebonyi will make any aspirant eyeing governorship slot to wait till 2023. There’s no vacancy in Ebonyi till 2023. Ohanaeze Youths will roll out its structure for Governor Dave Umahi in 2019.”

While calling on the people of the South-East to take active part in the on-going voters’ registration exercise, the OYC said it would “aggressively mobilize every youths in the 95 LGAs of South east to register in the ongoing exercise.

“We call on our traditional rulers, town Union President Generals, Students’ Leaders, all the Churches through the Christian Association of Nigeria South East to join the leadership of Ohanaeze Ndigbo Youths in sensitisation program to register massively ahead of the 2019 election.”