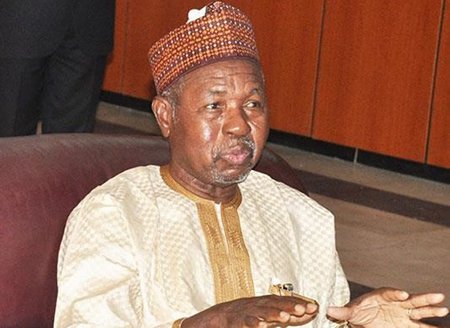 The Katsina State chapter of the National Union of Local Government Employees (NULGE) has endorsed Governor Aminu Bello Masari for a second term in office as a measure to ensure regular payment of their salaries.

The NULGE Chairman, Aliyu Haruna, made this known when he led a cross section of his members on a courtesy visit to the Governor at the Government House on Wednesday.

“We are going to support you,” Haruna told Governor Masari, adding that, “we have the figure and we know how to use it.”

According to him, “NULGE is one of the largest trade unions in the country and the state at large.

“Our members have been playing vital roles in the promotion of good governance, sustenance of democratic rule and development of the country.

“Our union is a great grass root mobiliser and we acknowledge the giant stride recorded by your administration in bringing peace to the areas bedeviled by insecurity.

“It is worthy of note that before the advent of your administration in 2015 most of the local governments in the southern part of the state were no go areas due to insecurity.

“We recall that in 2014 no fewer than 130 people were killed in a single attack in Sabuwa and Faskari local governments.

“Similarly, our union appreciates the many achievements recorded by your administration in the area of health, education, roads and infrastructure development, women and youth empowerment and water resources.

“At the union level, NULGE will like to say a big thank you to you for sustaining the payment of monthly salaries of our members despite the drastic reduction of revenues accruing to the government.

“We wish to equally appreciate the timely and effective settlement of gratuity and pensions of retired local government workers. Worthy of note also is the abrogation of Degree/HND dichotomy in the local government service.

“This is a commendable effort aimed at boosting the morale of local government staff and we wish to salute your courage in reinstating the over 2000 local government workers sacked by the immediate past administration of the state.

“We are equally grateful for the release of 2015 and 2016 promotions of local government governments staff.

“We wish to request that heads of local governments administration be placed on consolidated salary structure just like permanent secretaries in the state service.”

In his response, Governor Masari assured the union that government was set to organize local government elections soon and that elected councils who be given autonomy to operate.