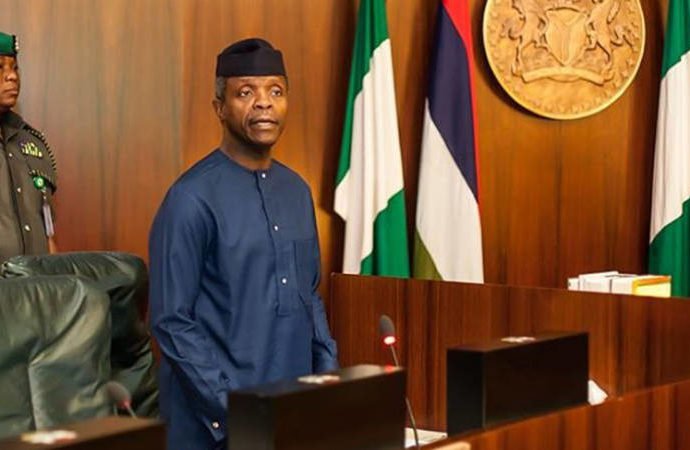 Osinbajo said there was no truth in media reports that his trip to Kano on Saturday was political.

The Vice President also denied meeting with any political group during the visit, which he said was solely to attend the wedding of his Personal Assistant, Hafiz Kawu.

This was made available to journalists by the Senior Special Assistant to the Vice-President on Media and Publicity, Mr. Laolu Akande.

The statement read, “The attention of Vice President Yemi Osinbajo, SAN, has been drawn to a TV news report suggesting that he was in Kano State on Saturday, 3rd of February, 2018 to meet with some political groups. This is completely false and misleading.

“On the contrary, the Vice President was in Kano to attend the wedding ceremony of his Personal Assistant, Hafiz Ibrahim Kawu, which was well publicised over the weekend.

“On arrival, he was met by Governor Abdullahi Ganduje at the airport, and went straight to the mosque, venue of the wedding nikhai.

“After that, he paid the traditional courtesy call on the Emir of Kano, His Royal Highness, Muhammadu Sanusi II, and proceeded back to the airport.

“At no time during the visit did he meet with any political group or groups. Any attempt to give the impression that he was in Kano for a political purpose is mischievous and should be disregarded.

“Indeed, the Vice President has, in the past few weeks, met in Abuja with the Kano APC leadership to ensure unity and full cooperation among party leaders, and this has also been well reported in the media.”