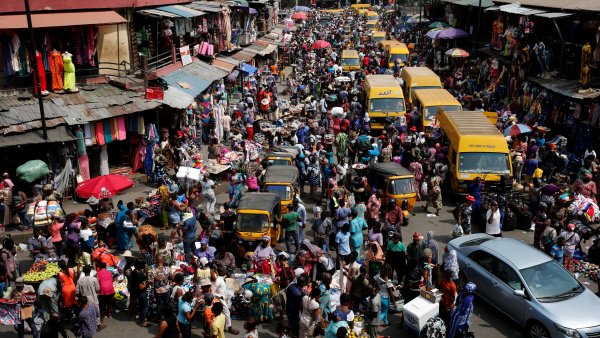 The Vice Chancellor of Bowen University, Professor Joshua Ogunwole, has warned that the increasing population in Nigeria will soon lead to food and water scarcity, if governments at all levels declined to support farmers with loans.

Ogunwole made this disclosure while speaking as a keynote speaker during a symposium on Irrigation and water management for agriculture in Africa held at International Institute for Tropical Agriculture (IITA), Ibadan.

The short course on irrigation and water resource management was facilitated by the Australian government to train Africans on irrigation systems in Agriculture.

Nigeria population according to Worldometers, a website which gives current information about population of various countries in the world is put at 199,617,970 as of Saturday, March 30, 2019, based on the latest United Nations estimates.

Nigeria population, according to the website is equivalent to 2.6% of the total world population.

Ogunwole, who is also a Soil Physicist while commenting on Nigeria population data said that the explosion may lead to challenge of food and water scarcity.

“It’s only appropriate for us as this level, to begin to plan before this tide carries everybody away.

“We’ve already began to see the social implication of this, with young people. Now, they are saying there is no future for them, and they’re trying to carve out a future one way or the other.

“This will keep happening, if we don’t really come with intervention measures to help the system.

Ogunwole stressed that for Nigerian farmers to really benefit from irrigation systems, it must be decentralized, and each farmer should produce his own irrigation. By so doing, Ogunwole said the irrigation system will become sustainable.

“There is a challenge with knowledge in Nigeria, there is knowledge deficit. And there is no support to facilitate the people who have the knowledge and the people on the feed doing the work.

“For you to do anything with irrigation, you must address the sociocultural aspect, the socioeconomic aspect. You must know the perception of the people about what you want to do. You should not be concerned with the technical matters alone.

“In Nigeria, there are farmers who have benefitted from irrigation schemes, but the people who really used irrigation well have been the FADAMA farmers across Nigeria.

“The FADAMA system aided them, brought food and money into their pockets than any other.

“We should stop copying Europe and America, we should be able to evolve something that is our own, putting the knowledge of out people into consideration.

“I believe in the decentralised irrigation system. People want to have personal things rather than general. Farmers will take it more serious.

The Course leader of the symposium, Dr. Gunnar Kirchhof said that the challenge of water overuse is challenge of the irrigation system, common to both Australia and Nigeria.

He said “The irrigation challenges we face in Australia is similar to the ones in many African countries. There is a lot of overlap, for instance, overuse of water resources. There are so many people taking out water. So, arrangements should be made to address the sharing of water.

“We have learned the hard way in Australia, and we have to consider what the whole community wants. And manage the water resources in a way that it will be profitable to all, without degrading it.”