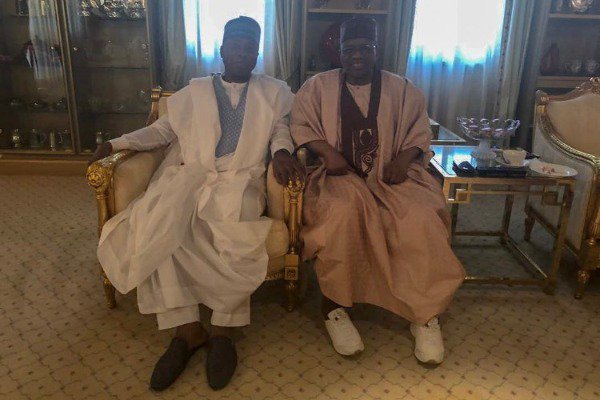 Saraki arrived IBB’s hilltop mansion at about 4:10pm in a convoy of nine vehicles and left at 5:50pm for the Minna International Airport.

DAILY POST learnt that the consultation meeting was for “direction on the way forward in view of recent happenings” in the country.

Before the meeting with IBB, Saraki and Speaker, House of Representatives, Yakubu Dogara met with Chairman of the Independent National Electoral Commission (INEC), Prof. Mahmood Yakubu.

The meeting followed their joint press conference on the invasion of the National Assembly complex by men of the Department of State Services (DSS).

At the briefing, the duo vowed that they will continue to fight for the advancement of democracy in the country.

Speaking to DAILY POST on Wednesday, a source close to the IBB camp said the matter was “mainly about security issues”.

He said Saraki sought to meet the former Head of State on his input “on how best to handle the security breach that occurred at the legislature.

“Of course, the 2019 general elections came up but that was not the agenda of the meeting.

“There has been wide condemnation about the siege and the truth is those within the security circles are not happy about what happened, including IBB.

“The former president, however, called for caution on the part of security agencies and all lawmakers despite party affiliations.”

After the parley, Saraki avoided journalists who wanted to interview him.

Contacted, one of his special assistants, said he could not speak on the former Kwara governor’s trip.

“I did not go to Minna with the SP, so I have no information on what was discussed”, he said.